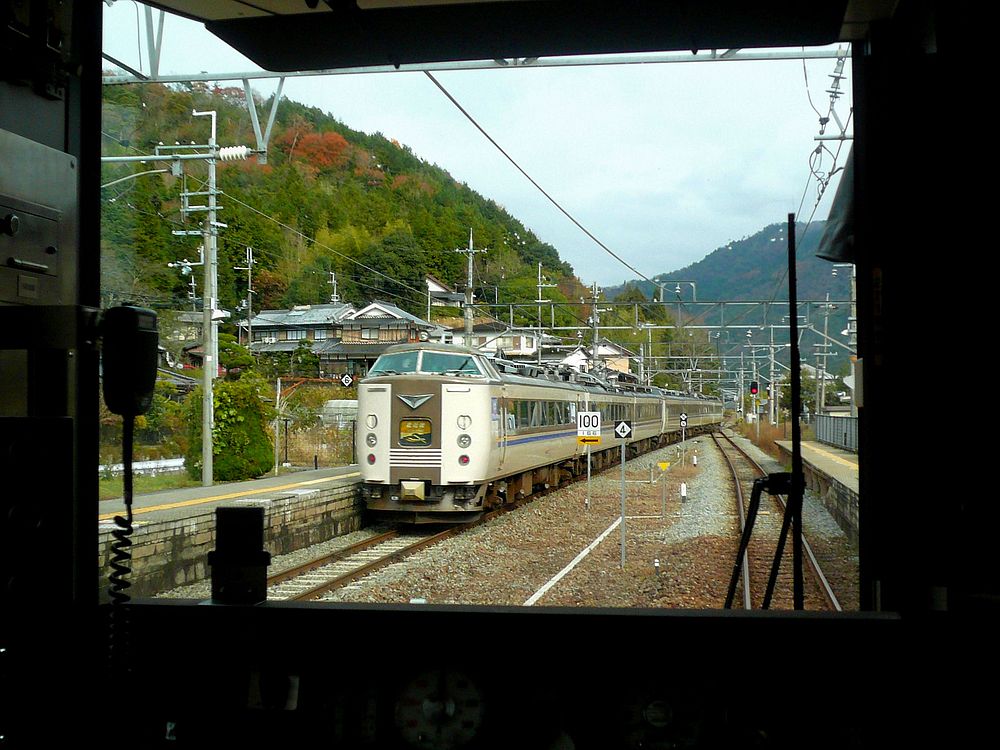 A Fukuchiyama-sen express service at Ichijima south of Fukuchiyama. The train is a class 183 set, now all replaced by newer types. (2010) 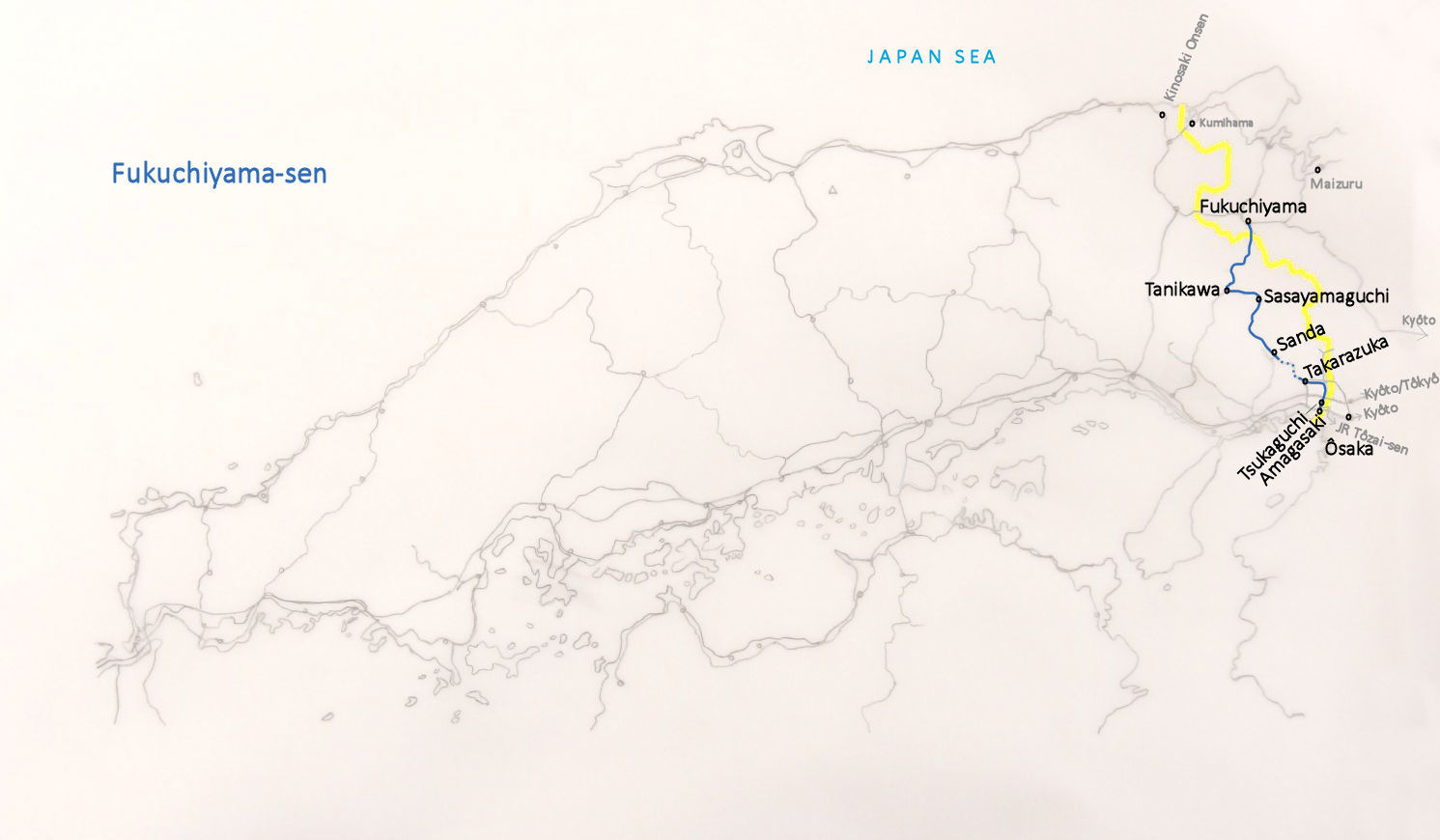 This line originally formed part of the important link between Ôsaka in the south and the Japan Sea naval harbour of Maizuru. What is today known as the Fukuchiyama-sen runs through the Tamba mountains into the basin of Fukuchiyama, where it meets the San'in main line from Kyôto; the latter winds its way up to the Japan Sea through the mountain range north west of Fukuchiyama, while the relatively short connection to the Bay of Maizuru is formed by the Maizuru-sen, branching off from the San'in main line about 12 km east of Fukuchiyama.

From Ôsaka to Amagasaki (7, 7 km) Fukuchiyama-sen trains work over the Tôkaidô Honsen and then branch off inland towards the steep slopes of the Rokkô mountain range. Passing through Tsukaguchi (2, 5 km) Takarazuka is reached. From here trains enter the gorge of the Mukogawa river before coming out into the fertile Sanda plateau. Sanda City (146 m above sea level) is increasingly popular among residents in the Kansai area and accordingly has seen a lively development of housing and educational institutions. Since the opening in 1986 of the direct double track railway tunnel between Namaze (one stop after Takarazuka) and Dôjô (one stop before Sanda), which replaced the old line through the Mukogawa gorge, urban network trains from Ôsaka can reach the Sanda plateau in a short time.

In the direction of Ôsaka the service of urban network trains from Tsukaguchi, and partly also from Sanda, is very frequent. These trains partly go on from Amagasaki towards Kyôto, but most workings now are through services over the JR Tôzai underground line and then onto the Katamachi-sen east of Ôsaka.

Upwards from Sanda, Fukuchiyama trains soon enter into the narrow valleys of the Tamba mountains, population dwindles rapidly and the landscape is marked by small villages with elegant ancient farmhouses all the way up to Fukuchiyama, approximately 66 km. At Sasayamaguchi (58, 4 km from Amagasaki) passengers need to change from the longer trains from Ôsaka into short two-car sets operated by a driver only. Until closure in 1972 the Sasayama-sen branched off here and ran 17, 6 km up the valley to the east. After leaving Sasayamaguchi the Fukuchiyama-sen train arrives at Tanikawa (73 km from Amagasaki), where it meets the Kakogawa-sen coming up from the town of Kakogawa on the Inland Sea. Shortly before arriving at Fukuchiyama, a town of about 80'000 inhabitants, the train crosses the border from Hyôgo into Kyôto Prefecture.

The first railways in the Amagasaki area began as horse-worked lines in 1891. Through working of steam trains to Maizuru could start in 1904 and proved particularly important during the Russo-Japanese War (1904/5). For many years after, there was little modernisation. Efforts to renew the Fukuchiyama-sen commenced in 1979, and since 1997 the line is double track through to Sasayamaguchi. Electrification (DC 1500 V) was completed between Tsukaguchi and Fukuchiyama between 1981 and 1986. In 1986 freight services ended, but had to be resumed for a short time in January 1995 after the devastating Kôbe earthquake had destroyed other lines in Hyôgo prefecture.

As mentioned, there are frequent services to and from the city of Sanda, with about 2 trains an hour to Sasayamaguchi. From there to Fukuchiyama there is an hourly service. Apart from stopping trains, the Fukuchiyama-sen is also used once an hour by express intercity trains starting partly in Fukuchiyama itself, and partly in Kinosaki Onsen on the San'in main line. Until 2011 the Kita Kinki Tango Railway (today Kyôto Tango Railway) operated diesel tourist train sets from Kumihama on the KTR through to Ôsaka and Kyôto. 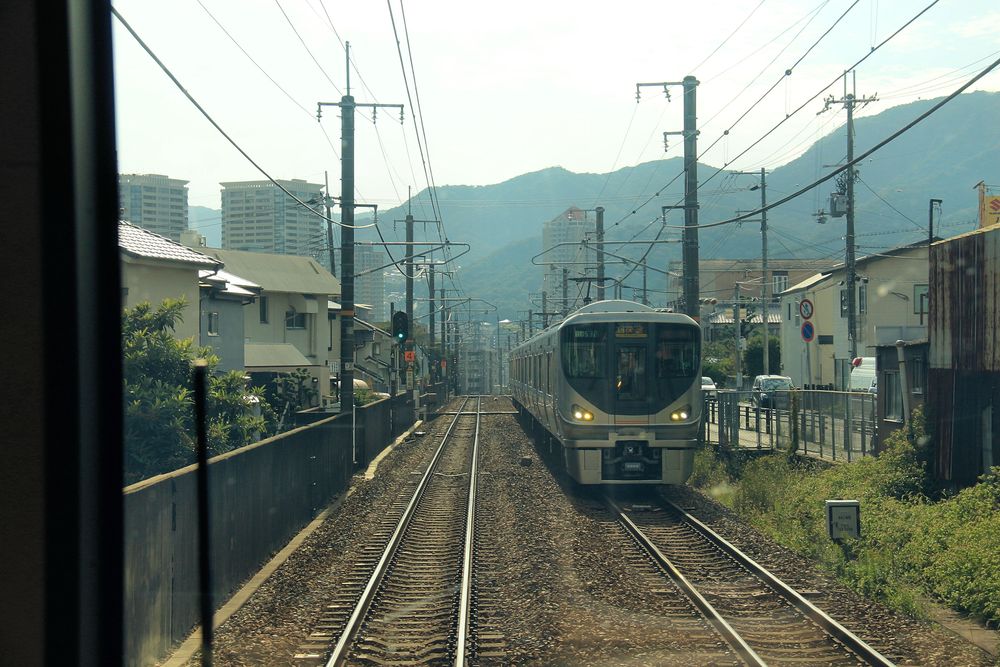 Urban network train class 225 (no. 6009) in Takarazuka, surrounded by typical high rise buildings along the slopes of Mount Rokkô. (2016)

Passing through the tunnels between Takarazuka and Sanda. (2013) 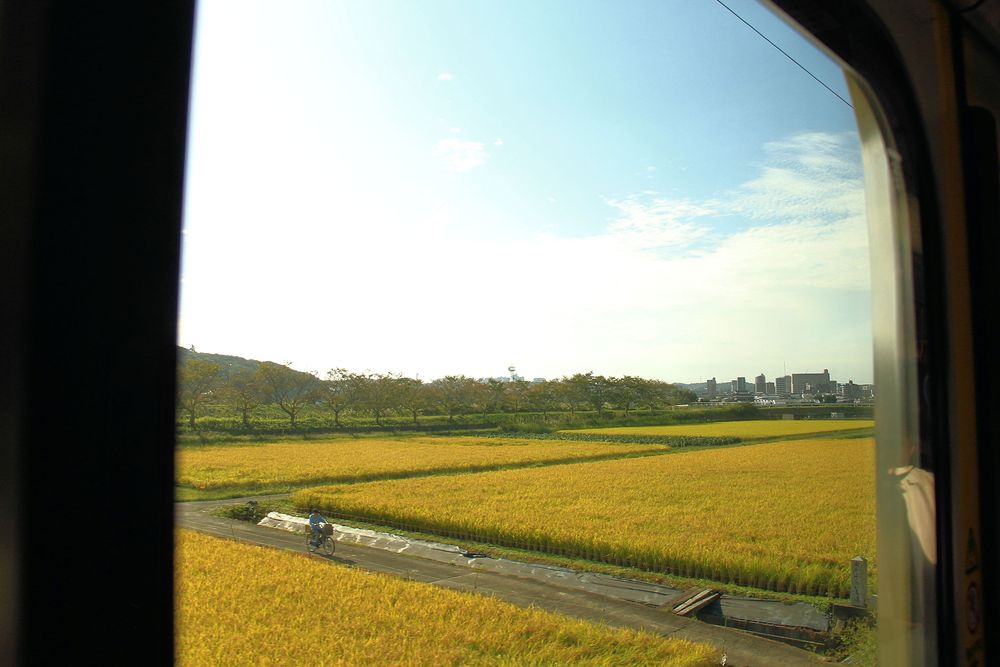 On the Sanda plateau, with the city of Sanda in the background. (2016) 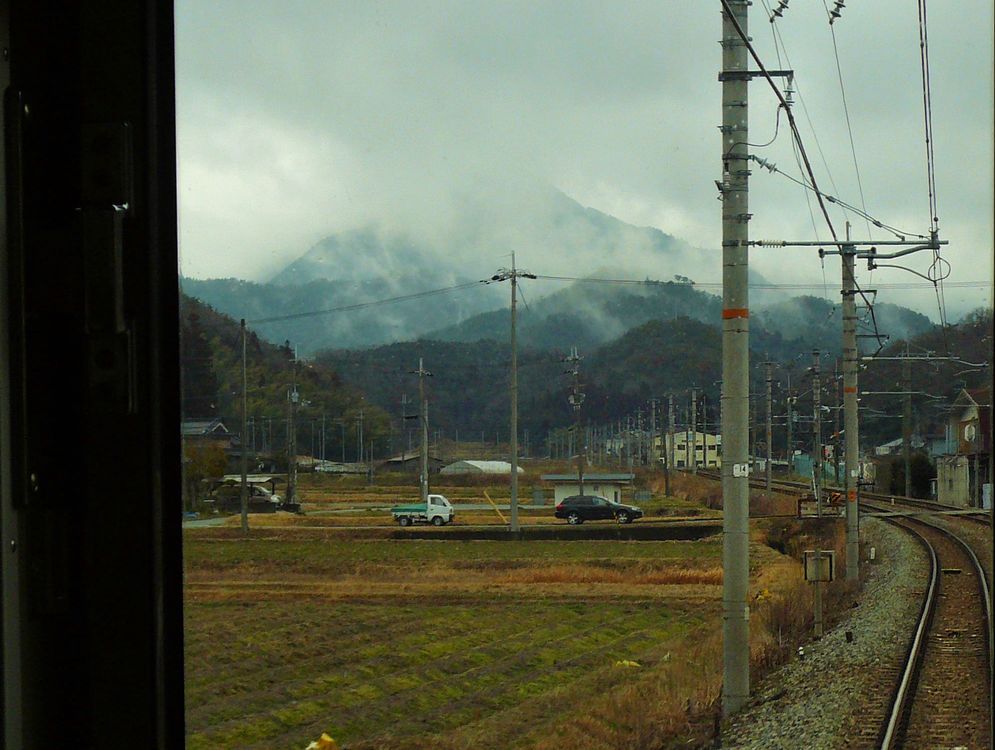 Between Kusano and Furuichi in the mountains between Sanda and Sasayamaguchi. (2009) 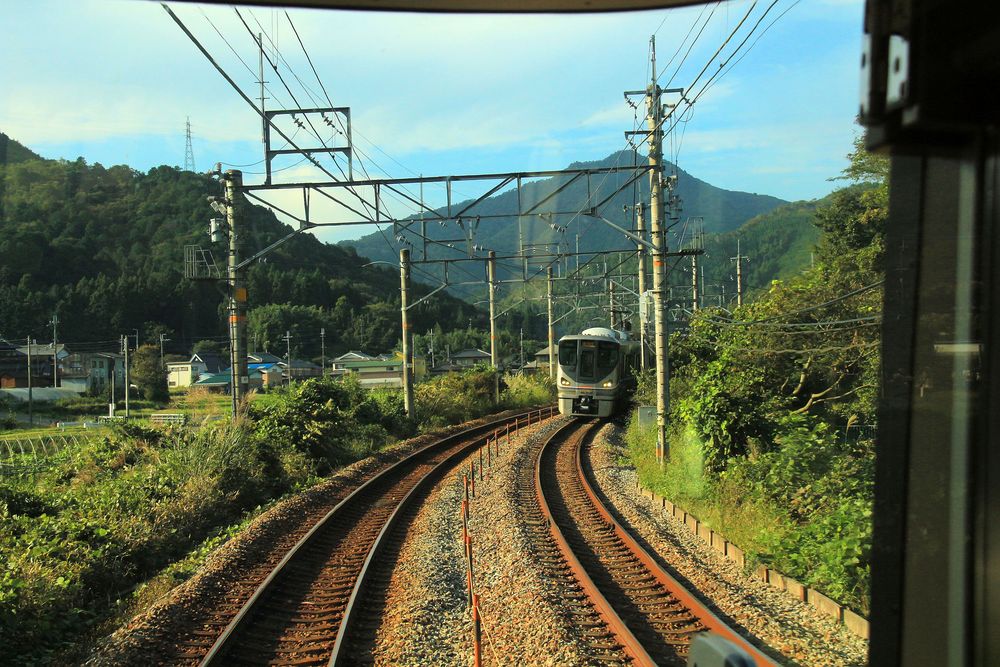 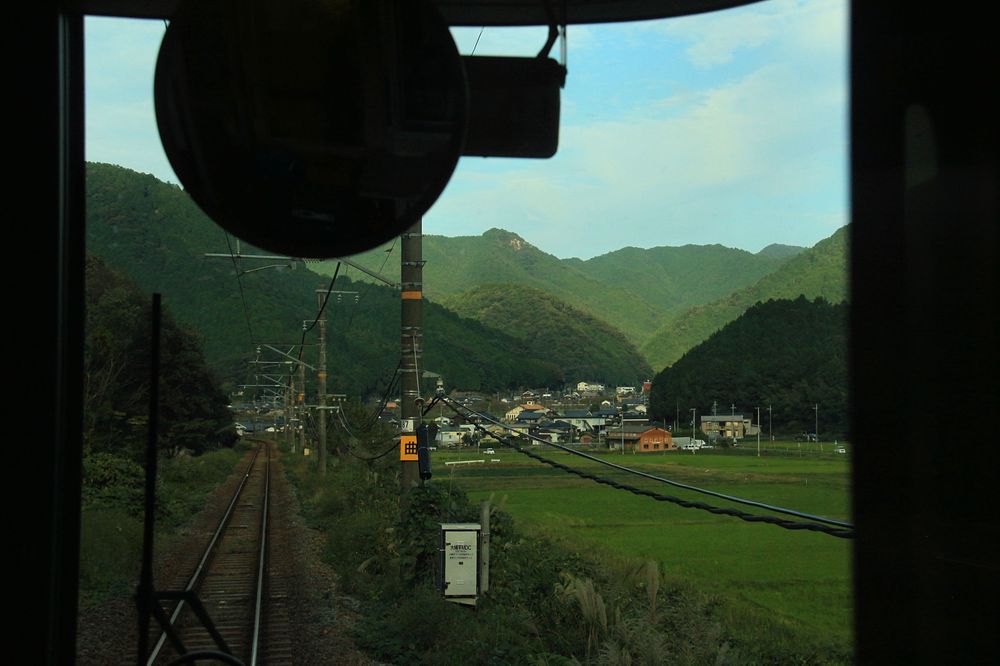 The village of Kaibara in the mountains between Tanikawa and Fukuchiyama. (2016) 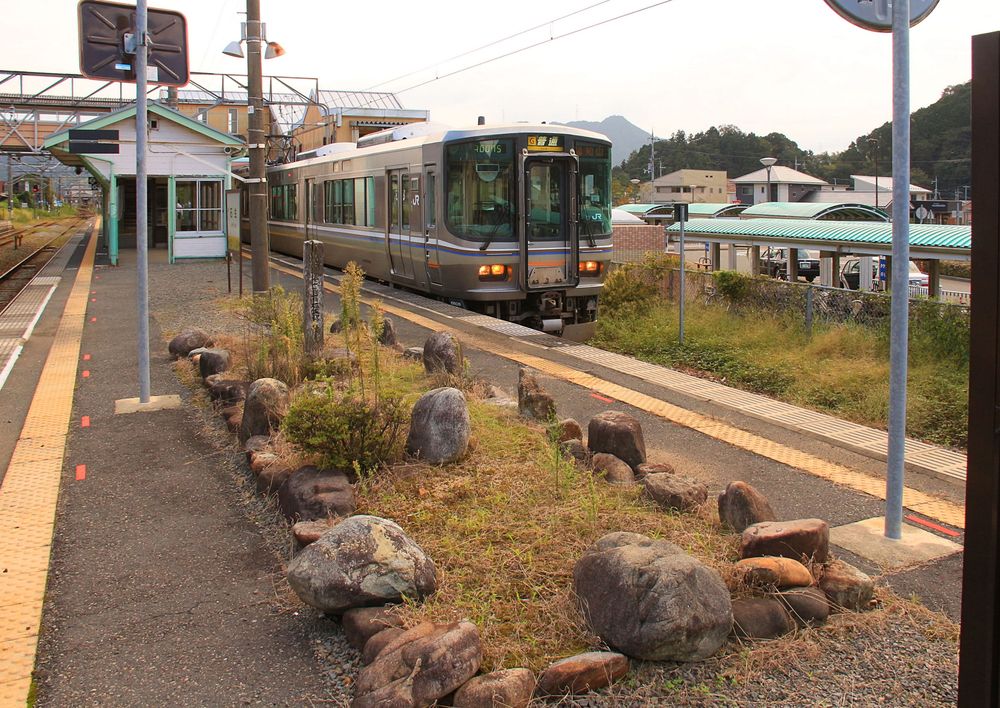 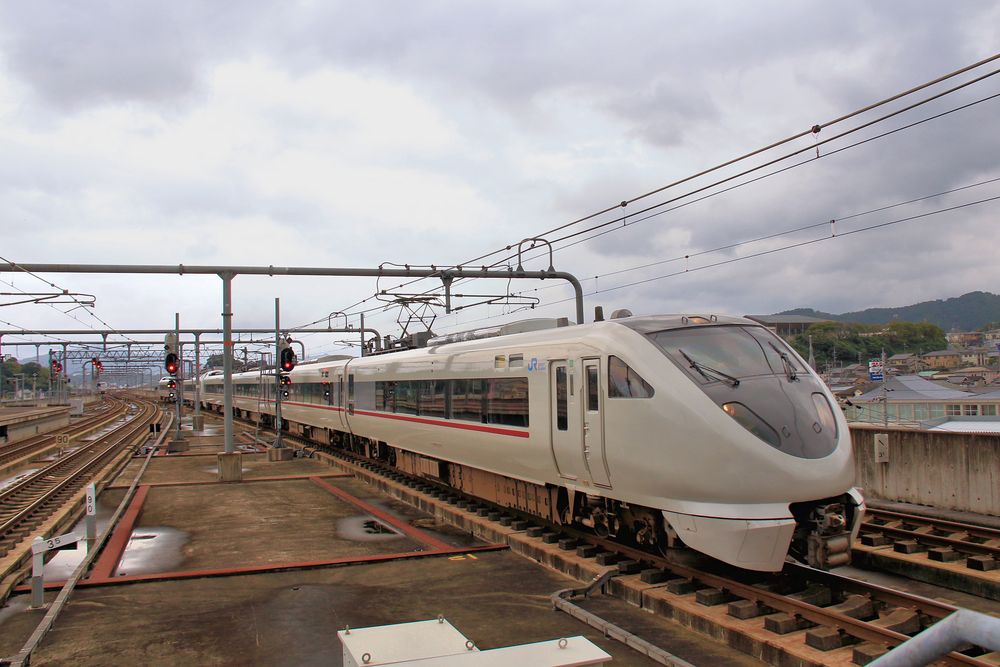