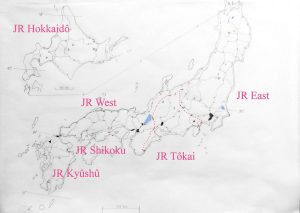 JR Hokkaidô is the railway operating company on Japan's northern island of Hokkaidô. Hokkaidô used to be isolated from Japan's main railway network, freight cars being transported on the ferry link between Aomori on Honshû and Hakodate on Hokkaidô. Passengers boarded the Seikan Ferry for the 4 hour crossing of the Tsugaru Strait (Seikan 青函refers to the two cities of Aomori 青森 and Hakodate 函館). In 1988 the Seikan Tunnel, 53, 85 km long and thus one of the world's longest tunnels, was opened and the Seikan ferry services ceased. From that date on JR Hokkaidô trains came through the new tunnel onto Japan's main island of Honshû, the border with JR East Japan being the Naka Oguni signal post just north of the village of Kanita.

By 2016 the line through the Seikan Tunnel received a third rail for operation both of 1435 mm and 1067 mm gauge trains. Since then freight trains continue to operate over 1067 mm track, but passenger services are operated in the form of 1435 mm gauge Shinkansen high speed trains through between Tôkyô and Shin Hakodate Hokuto. Shin Hakodate Hokuto used to be the small station of Oshima Ôno, located 17, 9 km into the hills north of Hakodate. Passengers for Hakodate transfer here into the newly electrified line down to the city. Planning expects the Shinkansen to continue from Shin Hakodate Hokuto all the way to the terminal at Sapporo by 2030. The Shinkansen border between JR Hokkaidô and JR East is at Shin Aomori.

The railway network on Hokkaidô is, unfortunately, not in good shape. During the 1980s hundreds of kilometres of line were closed down, and today the only really busy part of JR Hokkaidô is the urban network around Sapporo. Much traffic to and from Hokkaidô is in the form of air transport. The connection between the Shinkansen at Shin Hakodate Hokuto and Sapporo (via Higashi Muroran) is relatively well used, but taking around 4 hours it is quite a tiresome journey. Further north and further east of Sapporo we have the three long distance main lines to Wakkanai, Abashiri and Kushiro, but services are infrequent and, here too, many prefer the airplane. In the last years several local lines have in reality closed down, particularly after storm damage, though official closure has not yet been pronounced. The future for many short as well as long distance services of JR Hokkaidô looks bleak.

Heavy freight trains with agricultural products are typical for the main line from the Sapporo area down to Hakodate and from there through the Seikan Tunnel and Sendai into the Tôkyô area and Akita – Toyama into the Kansai area (Kyôto/Ôsaka); these freight trains are worked by JR Freight. To the east and north of Sapporo there are only very few freight workings, containers are mostly brought by lorry into Sapporo. 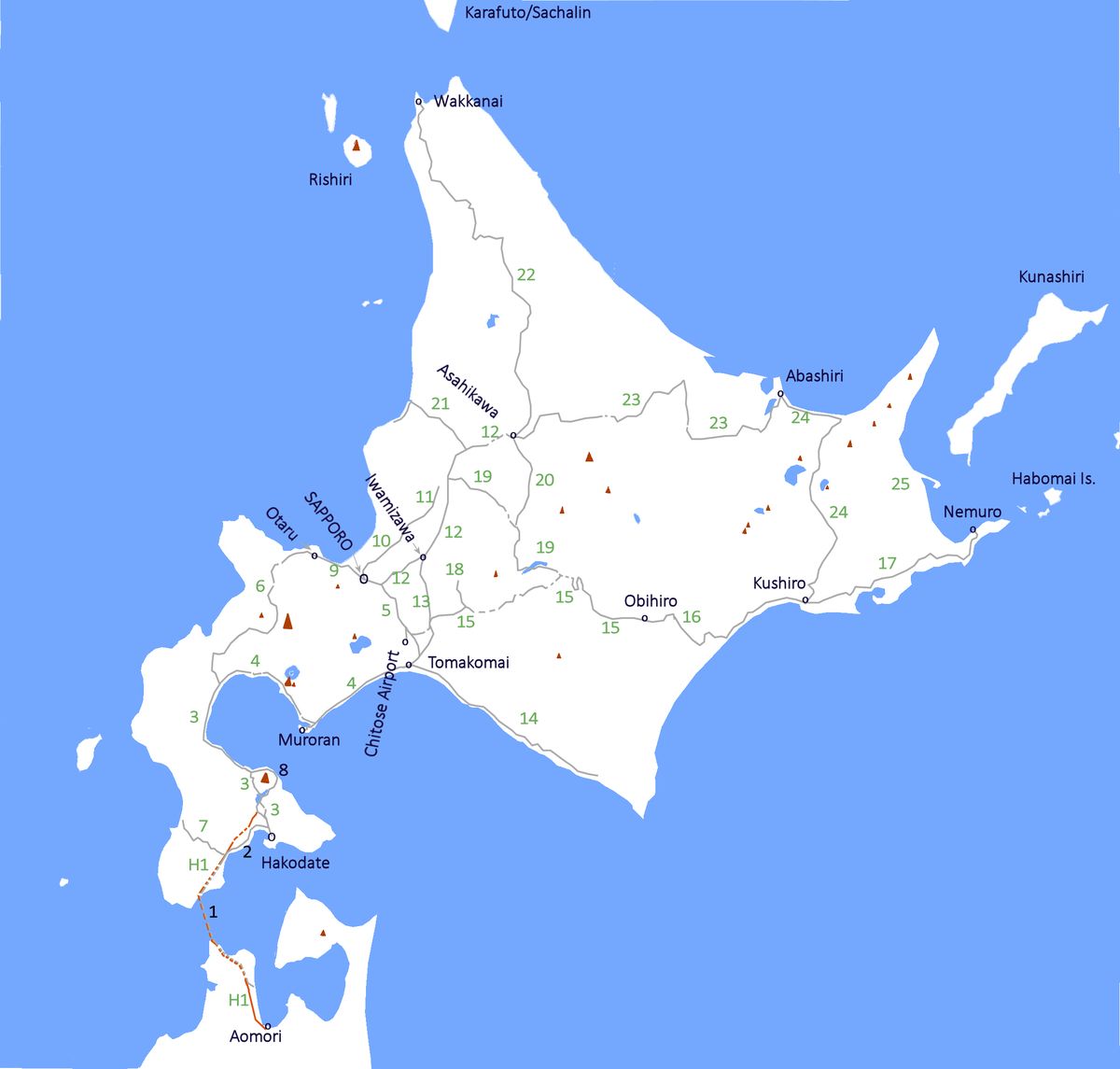 Note: The names of a considerable number of lines on Hokkaidô no longer reflect the actual running of train services, and are more or less irrelevant for practical purposes

3   Hakodate - Komagatake - Oshamambe  (officially an element of the Hakodate Honsen)

9   Sapporo - Otaru  (officially an element of the Hakodate Honsen)

12  Sapporo - Ebetsu - Asahikawa  (officially an element of the Hakodate Honsen)

13  Tomakomai - Iwamizawa  (officially an element of the Muroran Honsen)

16  Obihiro - Kushiro  (officially an element of the Nemuro Honsen)