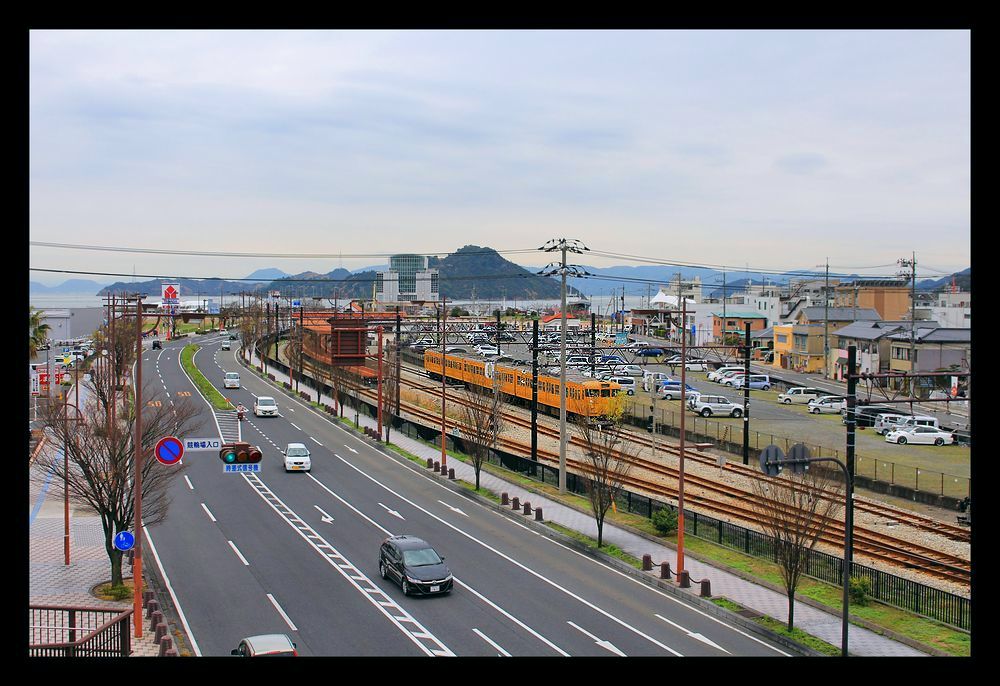 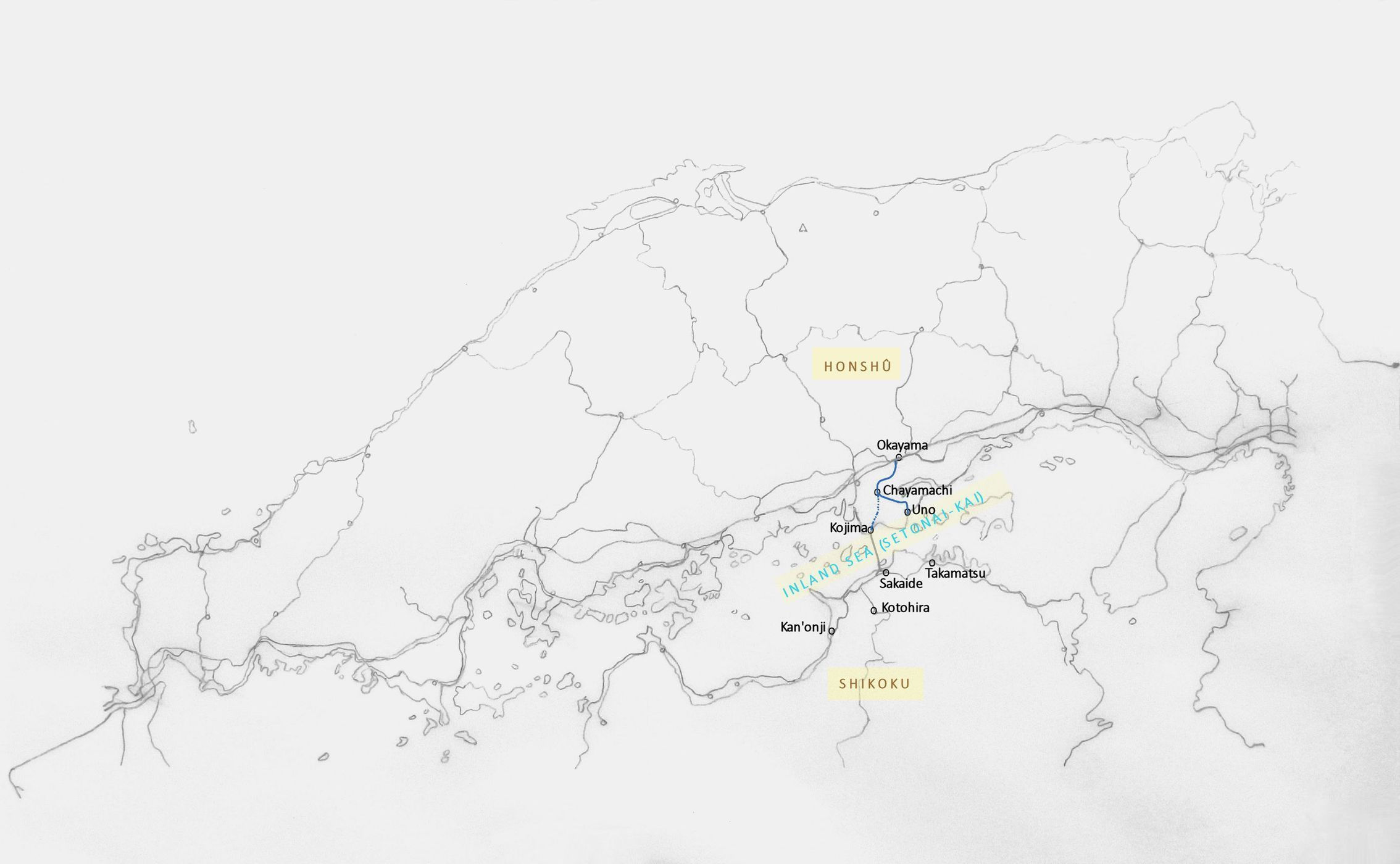 The Uno-sen, opened in 1910, used to be a local connection between Okayama, the village of Chayamachi and - across the mountain range - the port town of Uno, from where the ferryboats departed to the island of Shikoku. Together with the ferry link (21 km) between Uno and Takamatsu the line thus formed part of the main access to the smallest of Japan's major islands.

The section from Okayama to Chayamachi (14, 9 km) used to run through rural landscape, but now Okayama's suburbia is sprawling out to the south, giving the Uno-sen more and more the character of a suburban railway. Today the line's entrance to Okayama from the south is over nearly 5 km of modern, elevated track.  Coming from Okayama in the north trains again climb up onto elevated track to reach the station of Chayamachi. Much, but not all of the way the line is now double track.

From Chayamachi to Uno (17, 9 km) the line is single track. Electrification of the Uno-sen all the way from Okayama to Uno was completed already in 1960. The station of Uno used to have large marshaling yards, and it was marked by the extensive shunting lines needed for the transfer of freight wagons to and from the Shikoku ferry. Passenger coaches were not taken (for safety reasons). With the opening of the Seto Ôhashi (the Great Seto Bridge, a system of bridges across the Inland Sea totaling over 13 km in length) on April 10, 1988, the ferry service from Uno was withdrawn, leaving only a high speed boat connection which lasted until 1990. All freight traffic ended in 2002.

The Seto Ôhashi-sen was fully opened to traffic on April 10, 1988. From that date on, the Seto Ôhashi gave direct access to Shikoku by road and by rail. Officially, the Seto Ôhashi-sen carries the name Hon-shi Bisan-sen 本四備讃線 (Hon 本 stands for Honshû 本州, i.e. Japan's main island; Shi 四 stands for Shikoku 四国; Bi 備 stands for the old province of Bizen 備前, which is now the region of Okayama; San 讃 stands for Sanuki 讃岐, which is the old name of present-day Kagawa Prefecture on Shikoku, with the town of Takamatsu at its centre). The complete Seto Ôhashi-sen has a length of 28, 4 km, of which 12, 9 km as far as the station of Kojima are operated by JR West. From Kojima onwards the line belongs to JR Shikoku, and JR West personnel leaves the train and hands over to JR Shikoku personnel, and vice versa.

The Seto Ôhashi-sen leaves the elevated station of Chayamachi and heads directly south for the mountains that separate this rural area from the Inland Sea. These mountains are traversed in three long tunnels (2155 m, 3652 m, and 1605 m long) with small stations in between serving the settlements in the valleys. After the last tunnel trains arrive at Kojima, a small port town bordering onto the Inland Sea. Like the Uno-sen, the Seto Ôhashi-sen is electrically worked (DC 1500 V), it is double-track throughout and can be operated at speeds of up to 130 km/h.

The Uno-sen / Seto Ôhashi-sen (Okayama - Chayamachi - Kojima and on to the island of Shikoku) sees frequent express intercity services, namely the electric "Shiokaze" once an hour to Matsuyama (in the northwest of Shikoku), and the diesel operated "Nampû" once around every two hours to Kôchi and on to the west along the south coast of Shikoku via Kubokawa to Nakamura. Some "Nampû" services continue right to the end of the line at Sukumo in the far southwest. The line between Kubokawa and Sukumo belongs to the private Tosa Kuroshio Railway, and this railway's diesel multiple unit express train no. 2030 operates on a regular basis, together with JR Shikoku trains, all the way up to Okayama over the Seto Ôhashi and Uno lines. Mention must also be made of the sleeping-car express "Sunrise Seto", which leaves Tokyo at 22:00 and arrives at Okayama next morning at 06:27. Here the train sets divide. One set is the "Sunrise Izumo", which goes on to Yonago, Matsue and Izumo, the other set is the "Sunrise Seto", which crosses the Great Seto Bridge and arrives at Takamatsu at 07:27, on certain days going on to Kotohira (arrival 08:52) (The return journey is 21:26 from Takamatsu – 07:08 arrival in Tokyo). The main line Okayama - Kojima - Seto Ôhashi also sees container trains headed for Shikoku several times a day.

The most frequent fast service over the Seto Ôhashi-sen is the "Marine Liner", which runs between Okayama and the town of Takamatsu at half-hourly intervals. "Marine Liner" trains belong to the category of accelerated trains and require no supplement fare, but the front coach in the direction of Shikoku is a double-deck Green Car (First Class) panoramic vehicle, for which a special supplement ticket is needed. "Marine Liner" trains are usually composed of a three-car set (including the front panoramic car) owned by JR Shikoku, and a two-car set owned by JR West.

Stopping trains provide a frequent service from Okayama via Chayamachi down to Uno, at times operating as shuttle services between Chayamachi and Uno, requiring passengers to change at Chayamachi. A number of stopping trains also run from Okayama to Kojima; basically five of these continue over the Great Seto Bridge across the Inland Sea to and from Kotohira (3) or Kan'onji (2) on the island of Shikoku (and vice versa). 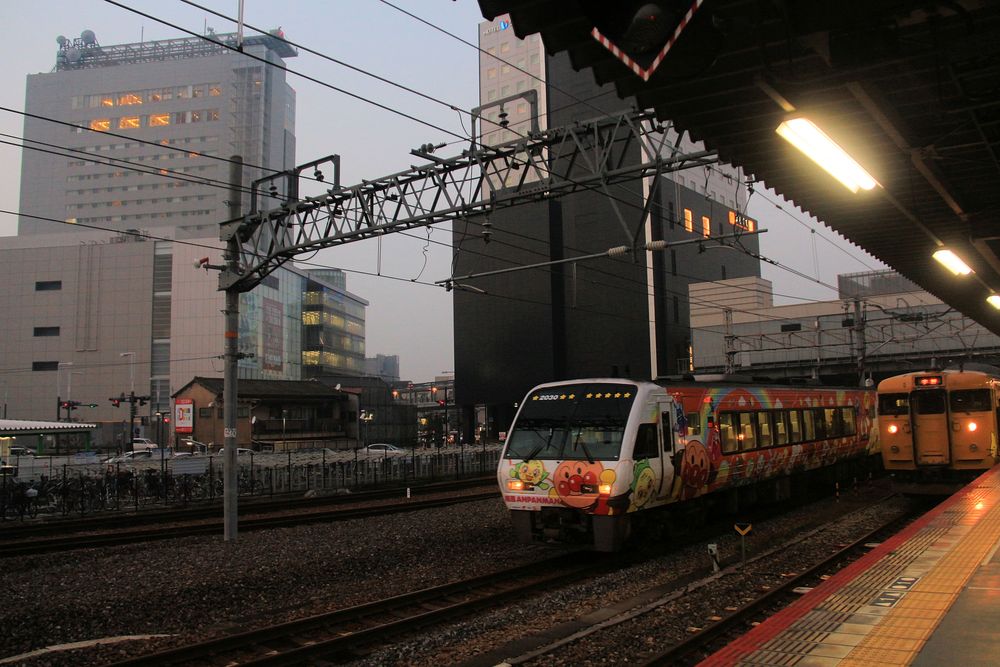 Okayama station with a local train to Uno on the right (class 115), and a "Nampû" express for Kôchi (on Shikoku). The "Nampû" express is formed of the Tosa Kuroshio Railway set no.2030, which is decorated with Anpanman figures taken from the picture and anime series written by Yanase Takashi. (2017)

From the train at Bitchû Mishima, between Chayamachi and Okayama. (2015) 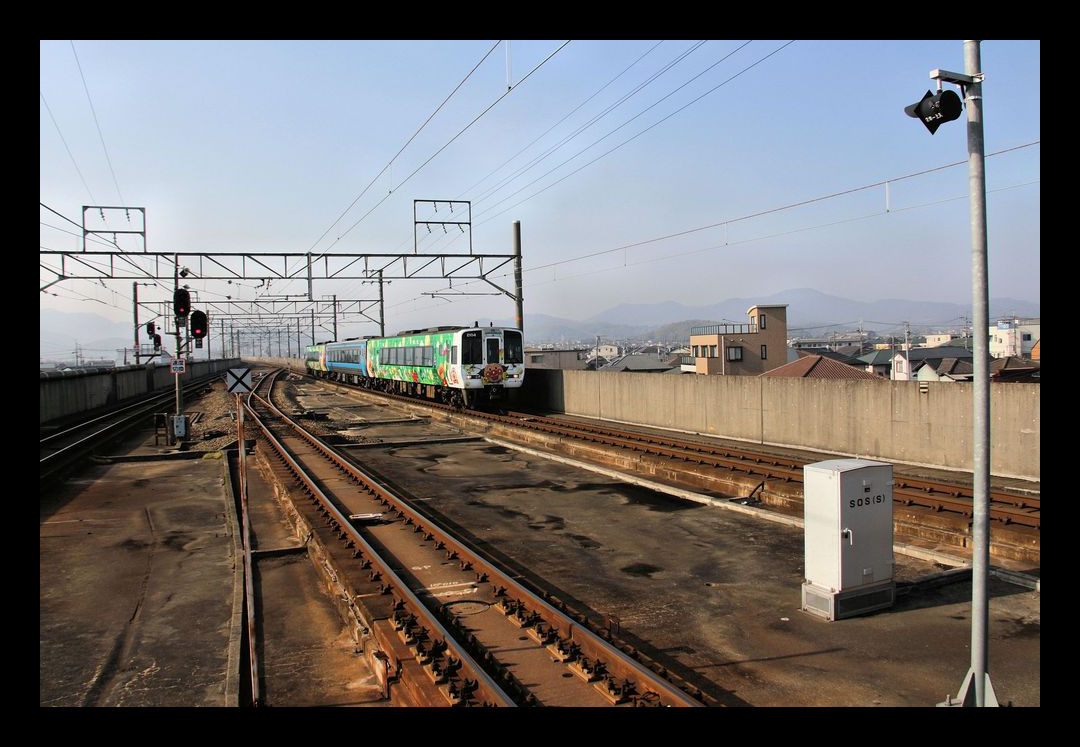 A three-car JR Shikoku diesel express has come from Shikoku and is running through Chayamachi. The front and end cars (JR Shikoku 2104 and 2007) are decorated as "Anpanman"-cars. (2018) 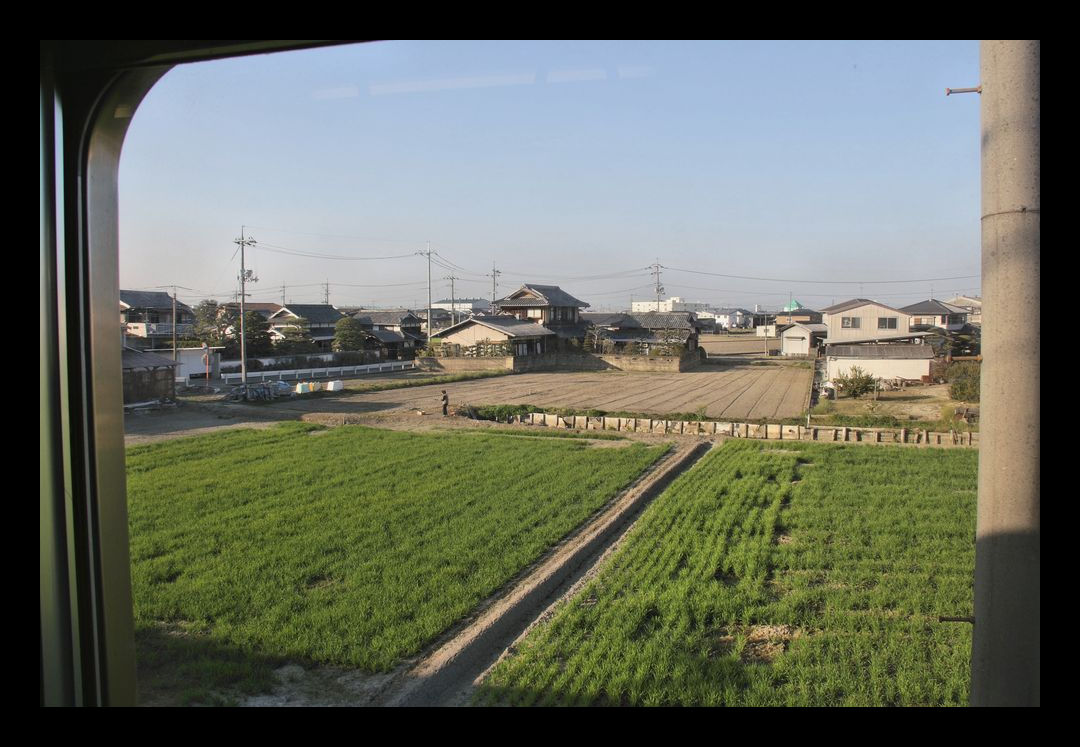 On the Uno-sen between Hachihama and Tsuneyama. Mixtures of old farmhouses and modern buildings. (2018) 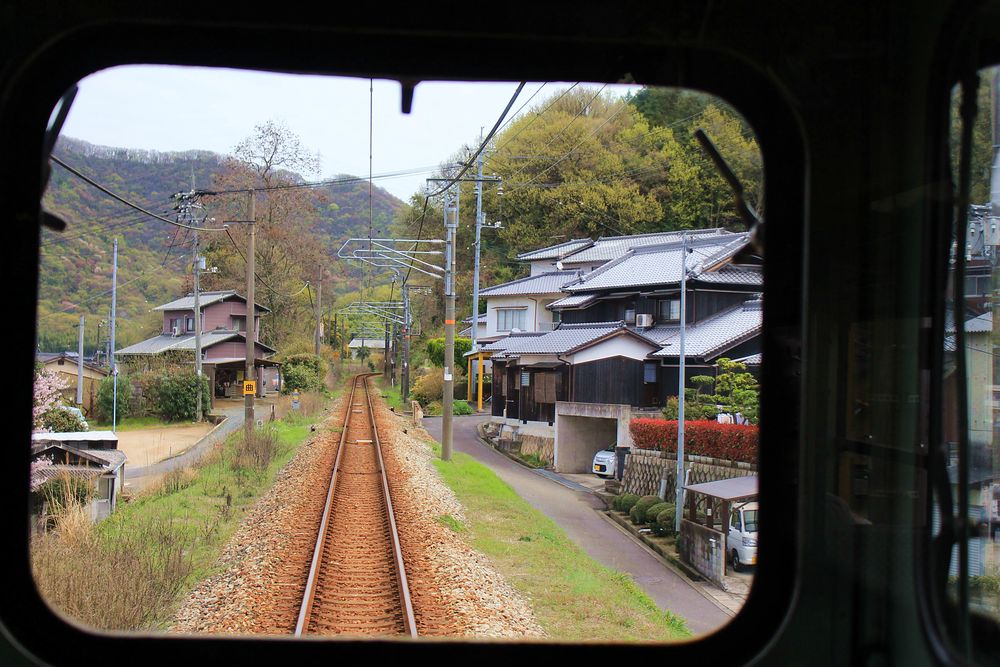 On the Uno line, climbing up over the mountains before the descent to Uno. (2015) 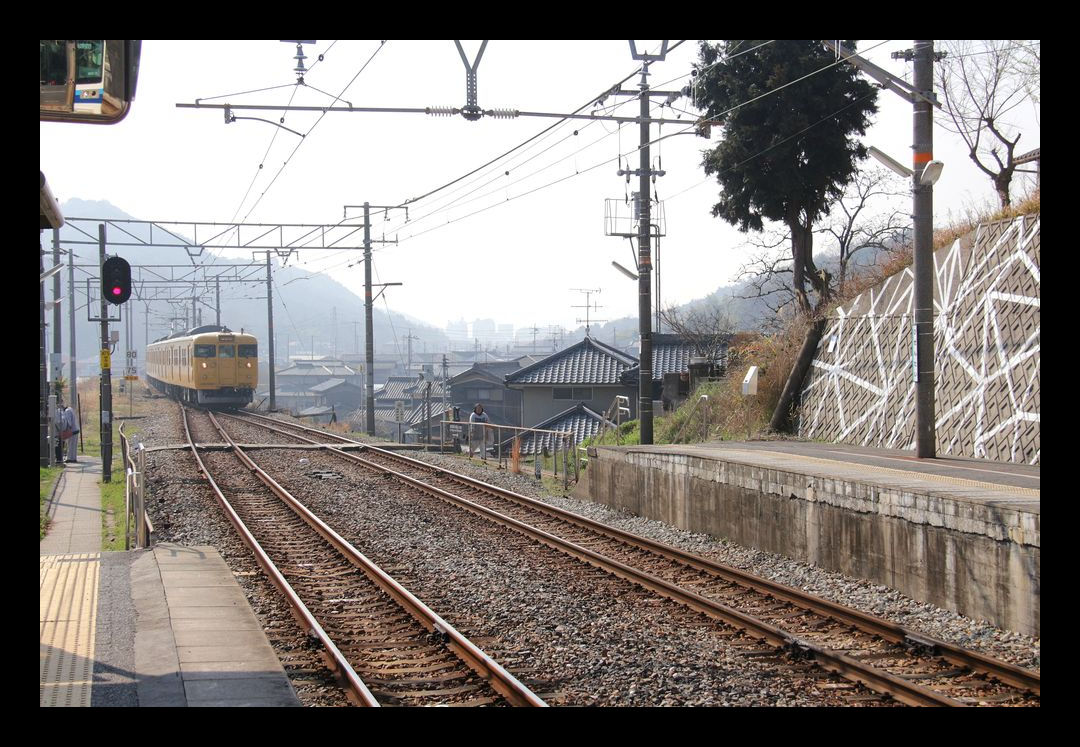 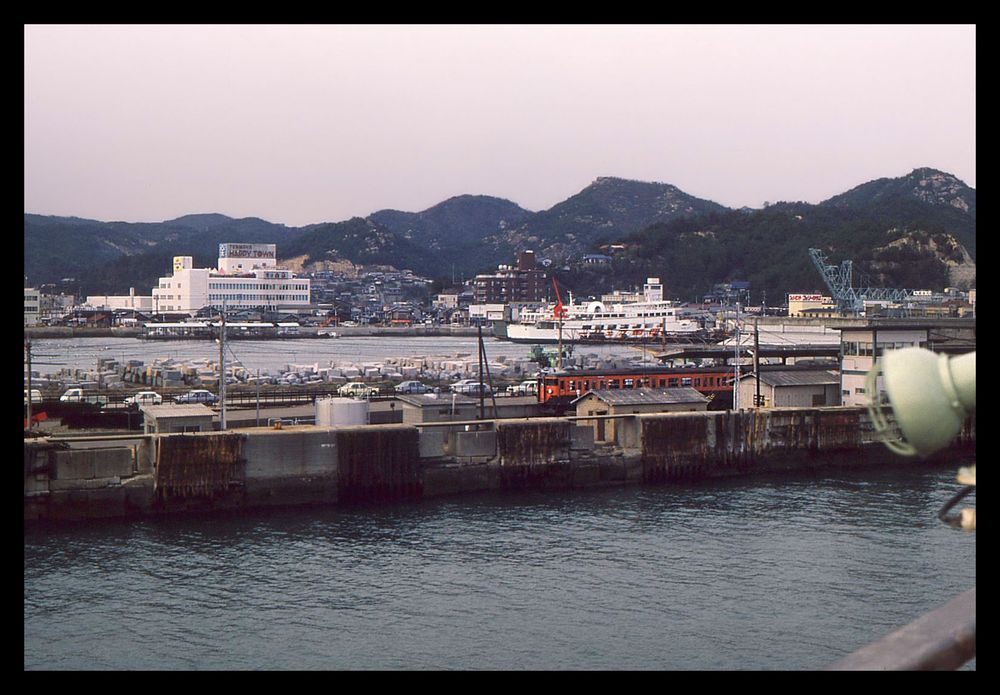 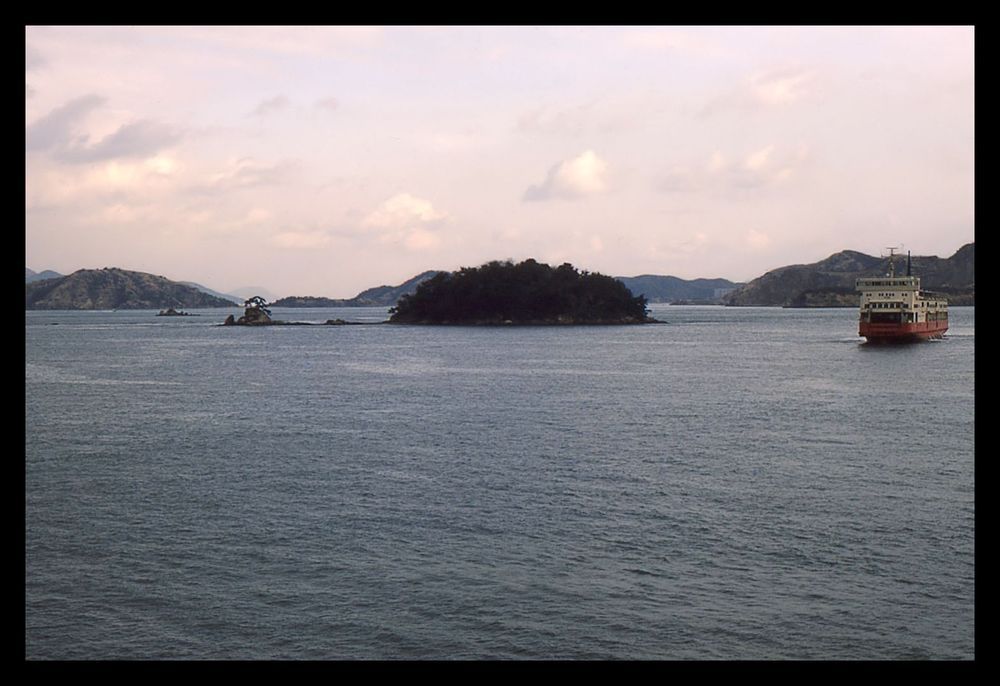 A State Railway ferry from Takamatsu arriving at Uno in 1978. 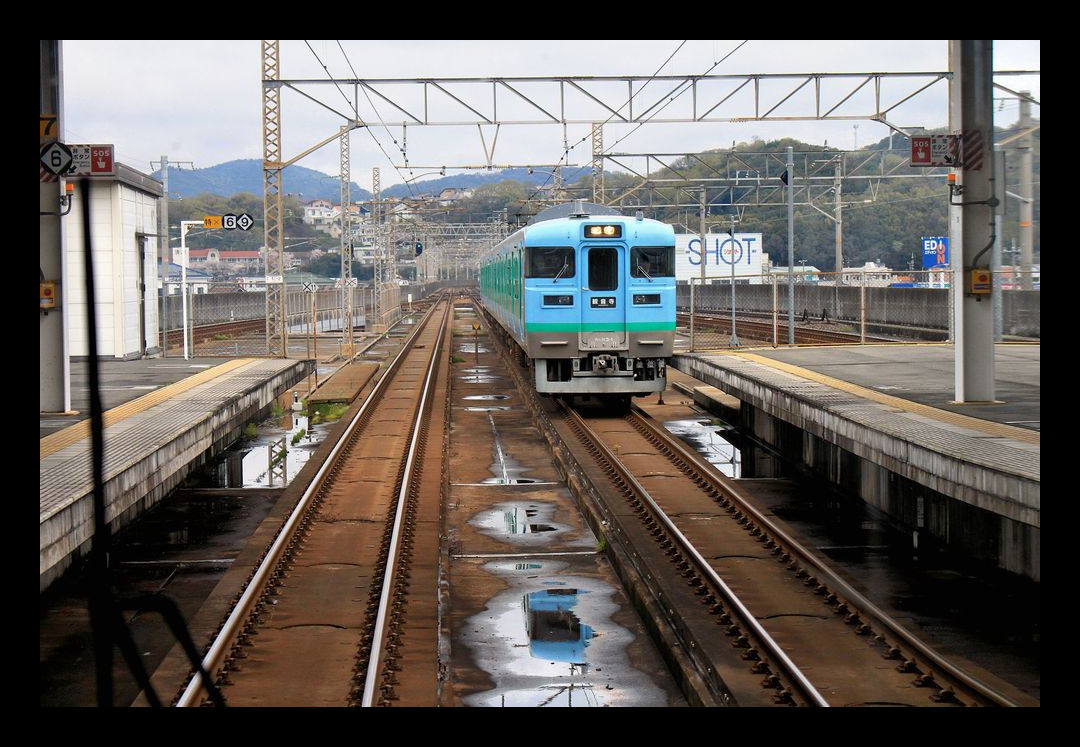 A local train entering Kojima from Okayama. It will continue across the Seto Ôhashi bridge to the island of Shikoku. The train is JR Shikoku unit 113-1. (2015)