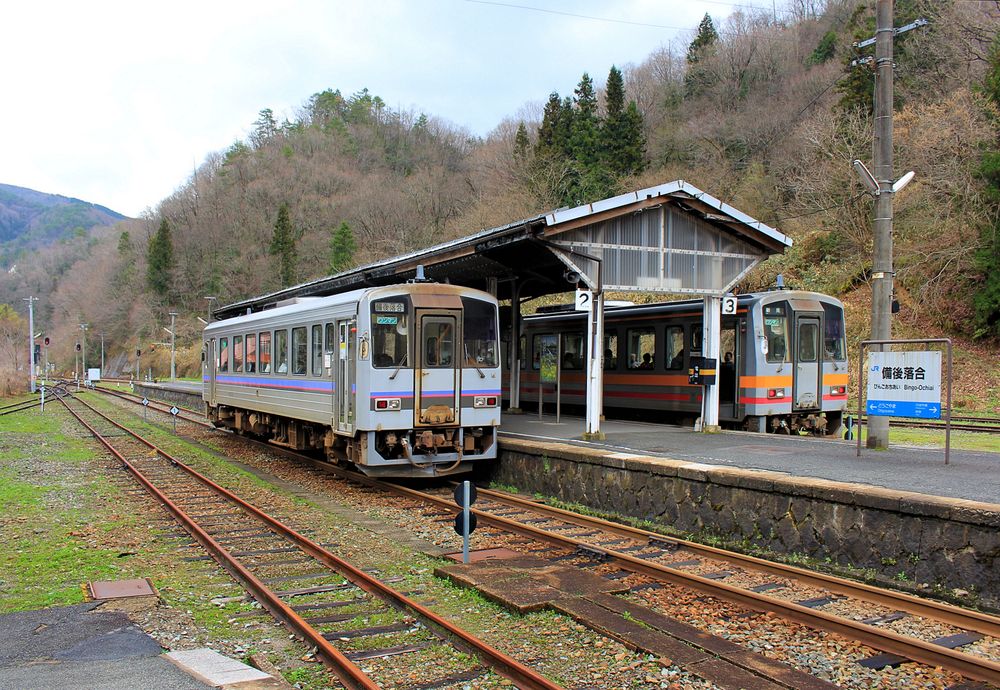 Bingo Ochiai is one of Japan's remotest junctions. Here three lines, which today see very little traffic, converge in the mountains in the north-eastern corner of Hiroshima Prefecture: 1) The line coming down to Bingo Ochiai from Niimi and Tôjô (Geibi-sen, eastern section) sees only three trains per day, arriving at 6:34, 14:25 and 19:51 and returning after a short stop (according to the timetable of April 2018). 2) The 5 trains coming in from Miyoshi in the west (i.e. the central section of the Geibi-sen) arrive at 6:43, 8:16, 14:21, 16:15, 18:46 and 20:48. 3) Bingo Ochiai is also served by the Kisuki-sen, which climbs up from Shinji (between Matsue and Izumo on the Japan Sea side). The three Kisuki-sen trains per day arrive at 9:06, 14:33 and 17:01, and return shortly after arrival. In addition, on certain days and particularly also in the season of red autumn foliage the tourist train "Izumo Orochi-gô" is run, consisting of a diesel locomotive with two open carriages (arriving at 12:36 in Bingo Ochiai and returning down to Kisuki at 12:57). Often in times of heavy snow fall, however, passengers off the Kisuki-sen are taken by taxi up to Bingo Ochiai. All trains except the Izumo Orochi-gô consist of just one short diesel car class KIHA 120.

Bingo Ochiai junction has lost many of the services that once came and went from here. For instance, in 1997 there were 7 trains from the Niimi section, 9 trains (one of these an express) from the Miyoshi section, and 4 from the Kisuki-sen. On the Miyoshi line (the central section of the Geibi-sen) there were two express trains in 1997, one running Bingo Ochiai – Hiroshima, the other Bingo Shôbara – Hiroshima; these services ended in 2007. 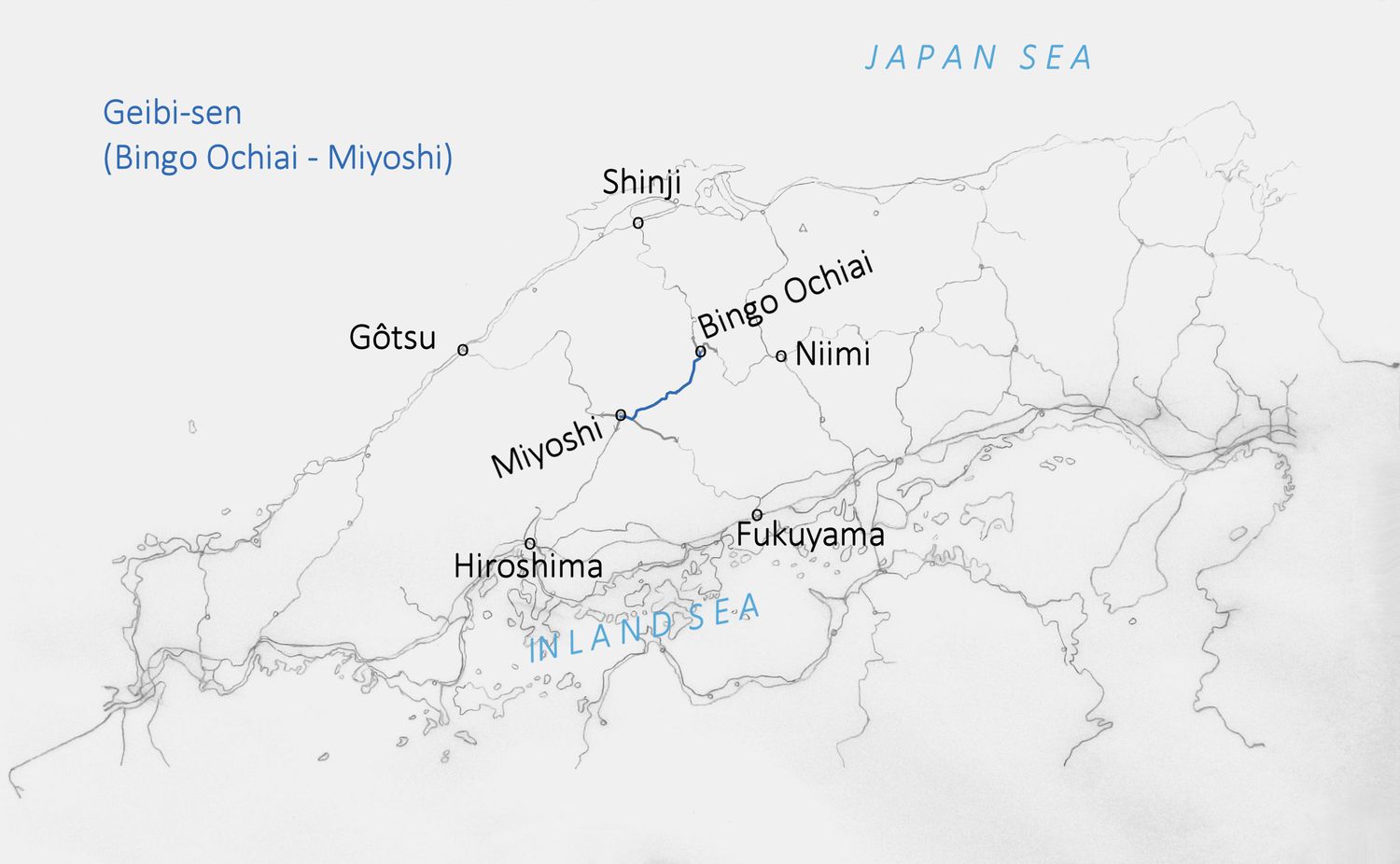 The Geibi-sen is a non-electrified line starting at Hiroshima and running up into the central mountain plateau of Western Japan. It operates in three distinct sections; today there are no through trains over the Geibi-sen. The first section from Hiroshima up to Miyoshi (68, 8 km) has the characteristics of a suburban line for a distance of about 15 km, then it becomes a local rural line. The second section from Miyoshi to Bingo Ochiai (45, 7 km) runs in north-easterly direction through the rural communities of the highlands until only sparsely populated mountain villages are reached. The third section from Bingo Ochiai to Niimi (51 km) climbs steeply up into the hills to reach the little town of Tôjô, after which the border from Hiroshima into Okayama Prefecture is crossed. Continuing there through small mountain communities the Geibi-sen joins the Hakubi-sen, the electrified main line from the Inland Sea (Okayama, Kurashiki) to the Japan Sea (Matsue, Yonago, Izumo), at Bitchû Kôjiro (159, 1 km from Hiroshima). Geibi-sen trains serve the one intermediate station Nunohara between Bitchû Kôjiro and the terminus at Niimi. The line takes its name from the two characters gei 芸 and bi備 , which stand for the former provinces of Aki 安芸 (now lower and western Hiroshima Prefecture with much of the Inland Sea coastline ) and Bingo 備後 (now some eastern areas and the mountain plateau within Hiroshima Prefecture ).

The central section of the Geibi-sen (Miyoshi – Bingo Ochiai, 45, 7 km) descends steeply for 5, 6 km from Bingo Ochiai along the river gorge into the plain at Hibayama. Here the central highlands gradually open up, although for quite a distance the villages remain small and single farm houses are scattered throughout the countryside. Bingo Saijô and Bingo Shôbara are somewhat larger communities, and at Shiomachi (7, 1 km from Miyoshi) the Fuku'en-sen converges with the Geibi-sen.

The section from Miyoshi to Bingo Shôbara was opened in 1922/23, and Bingo Shôbara to Bingo Ochiai went into service in 1934/35. In 1933 the line became part of the national railway system. 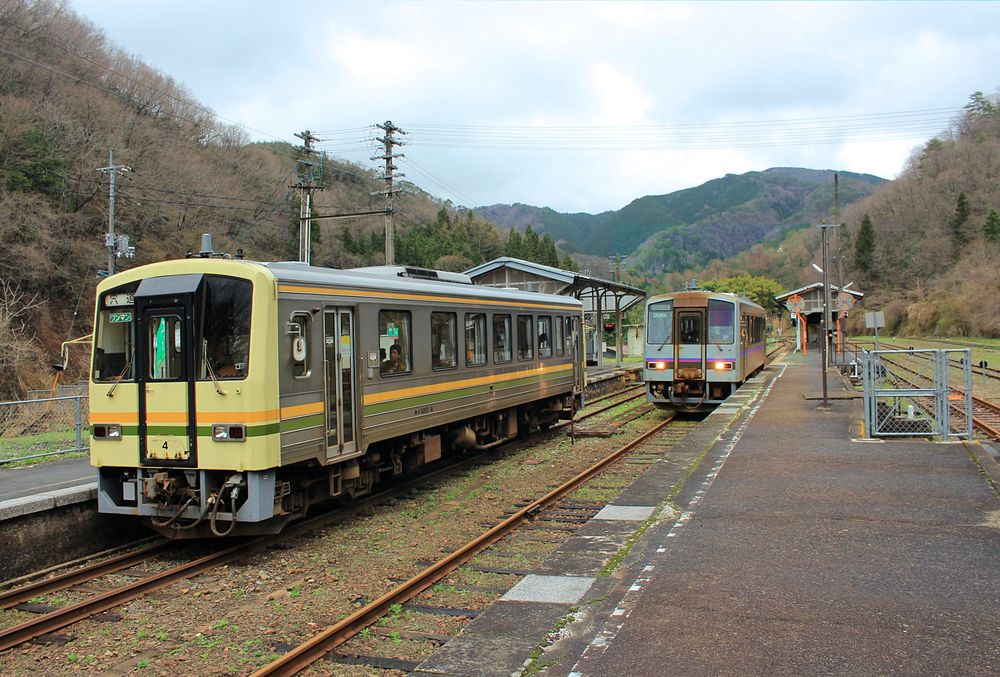 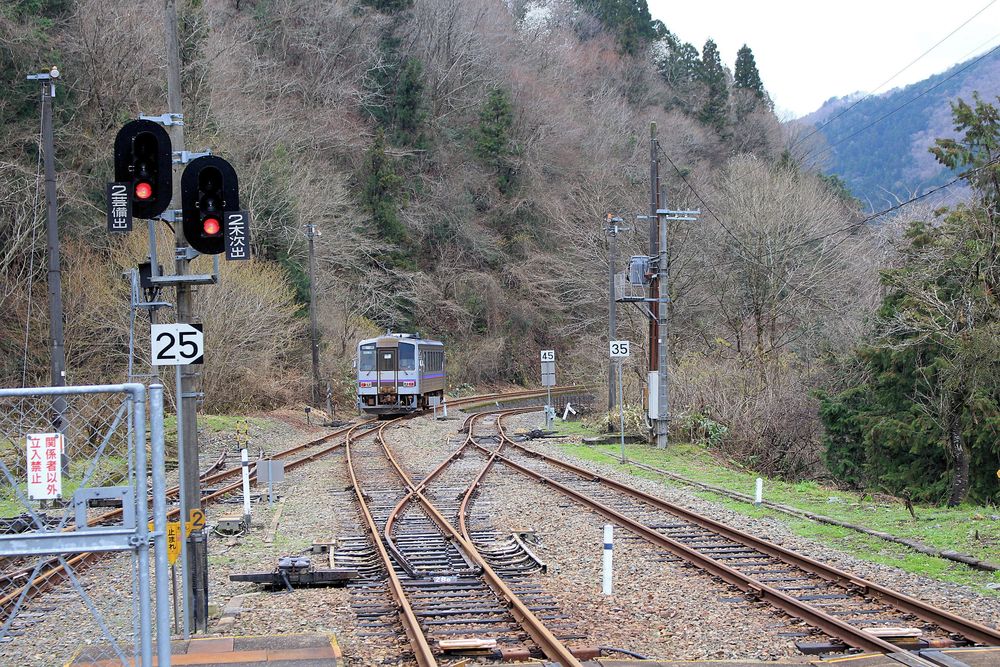 Diesel car KIHA 120 no.21 leaves Bingo Ochiai for Miyoshi. On the right the Kisuki-sen descends sharply towards Kisuki and Shinji. (2015) 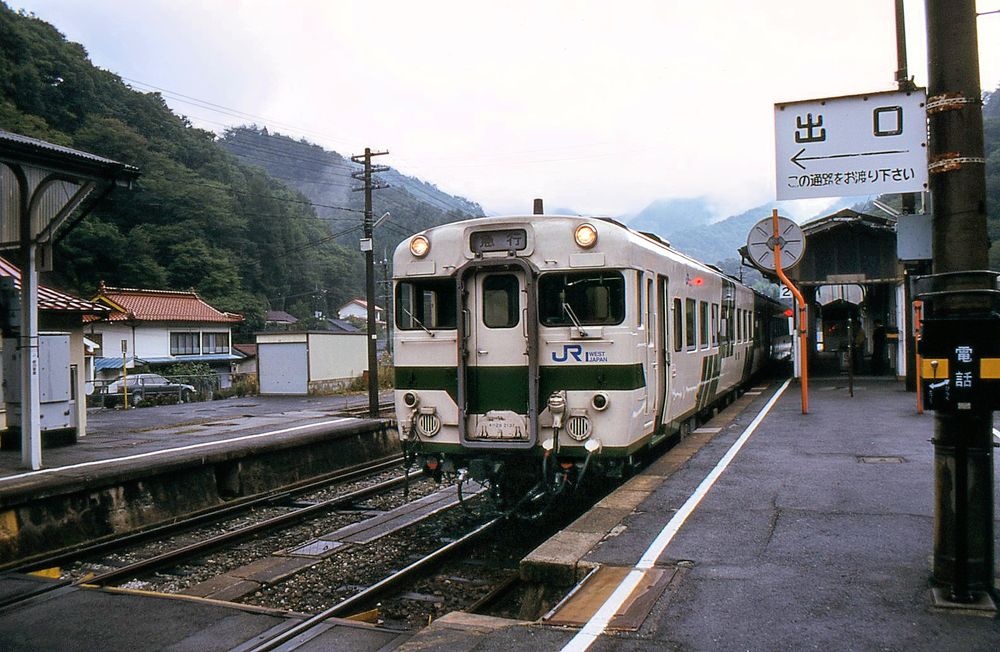 At Bingo Ochiai in 2001 a two car diesel train (lead by class 58 no 2137) forms an express for Miyoshi and Hiroshima. 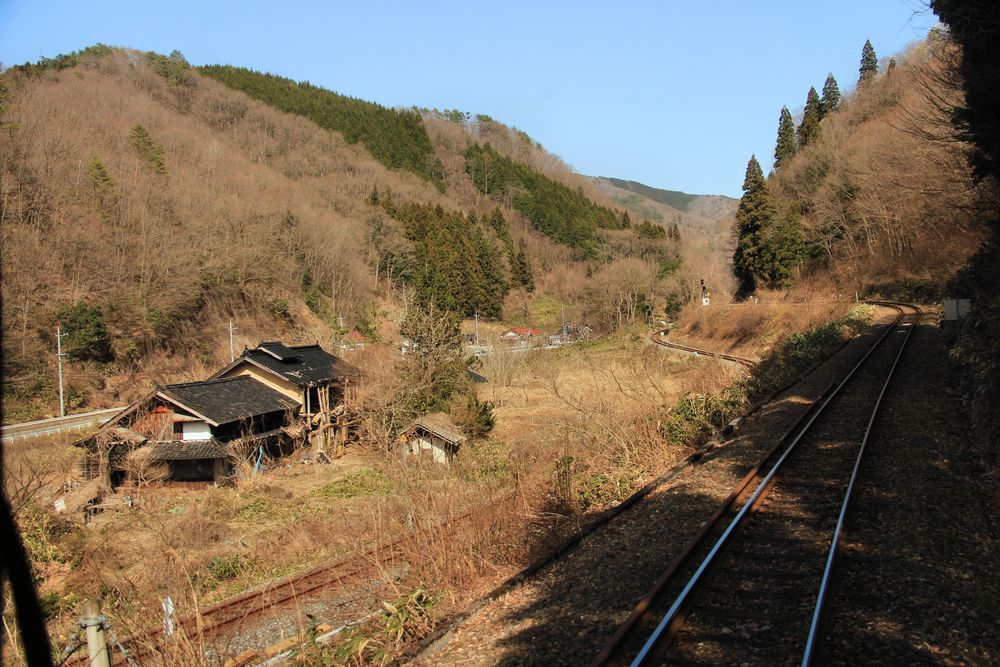 Looking back towards Bingo Ochiai from a train to Miyoshi we can see the Kisuki-sen descending below. (2018) 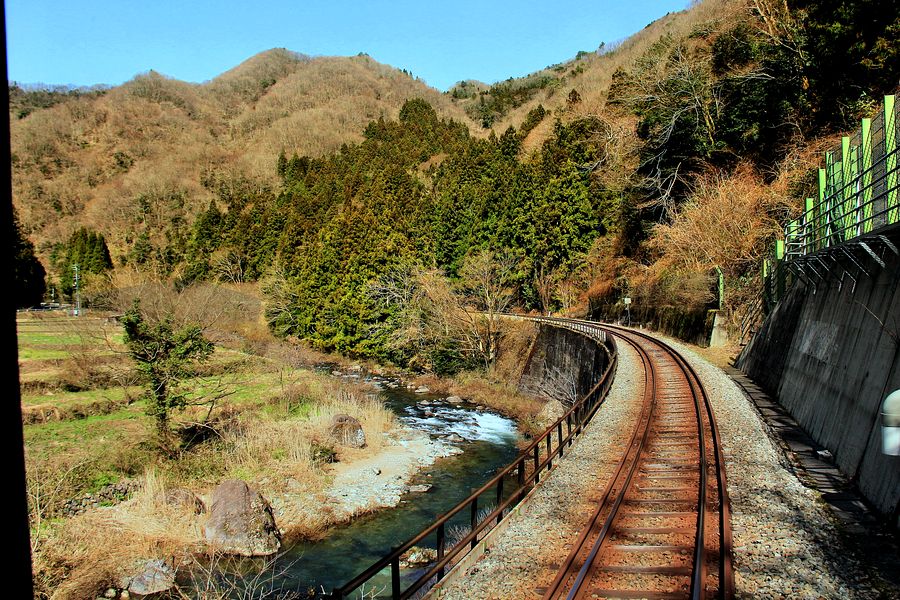 On the way down from Bingo Ochiai towards Hibayama. (2018) 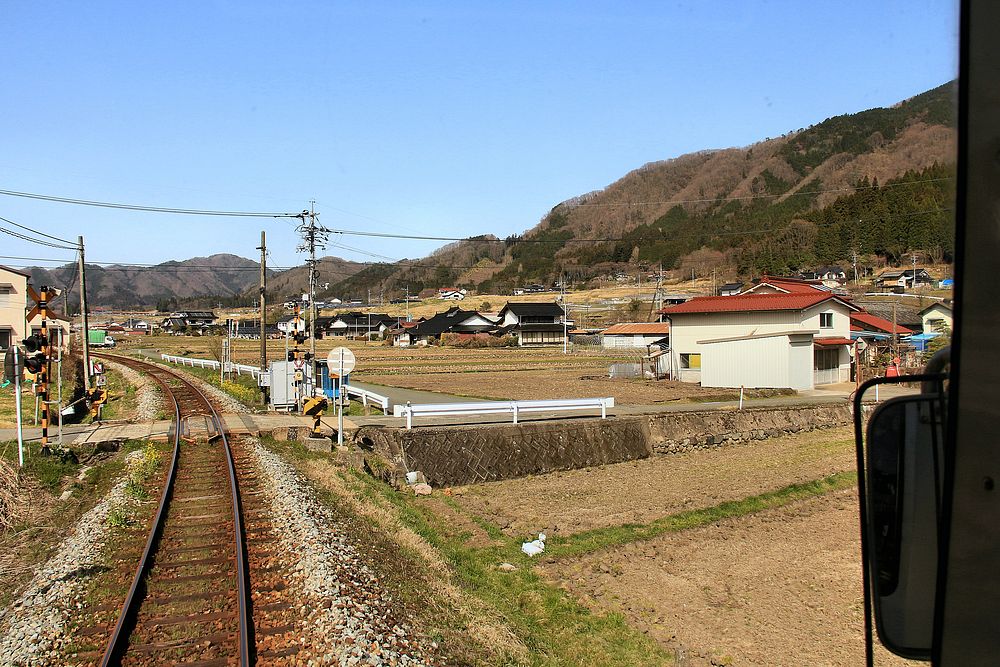 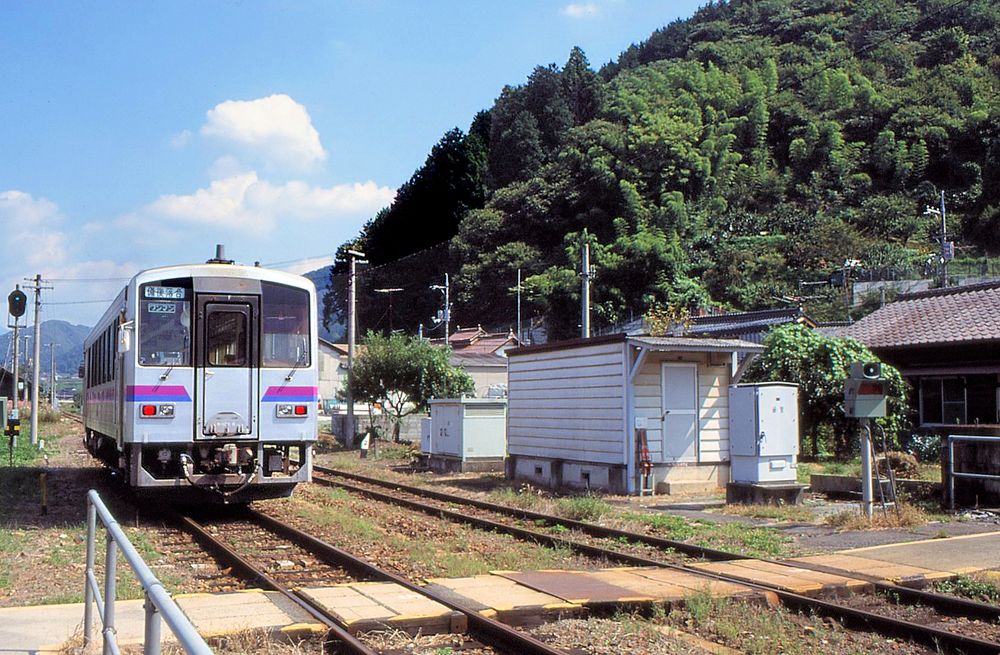 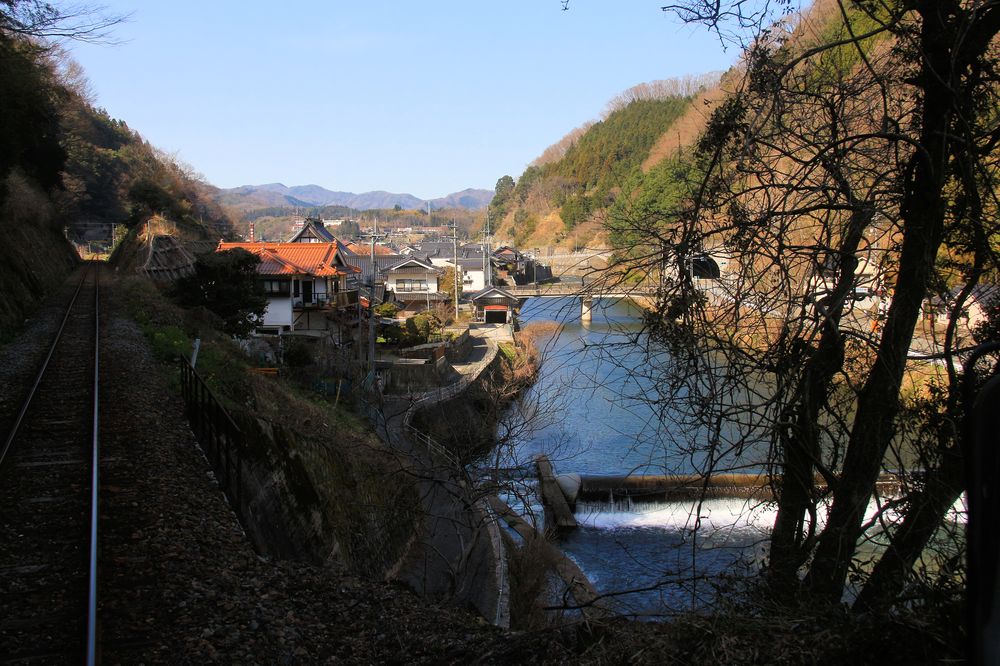 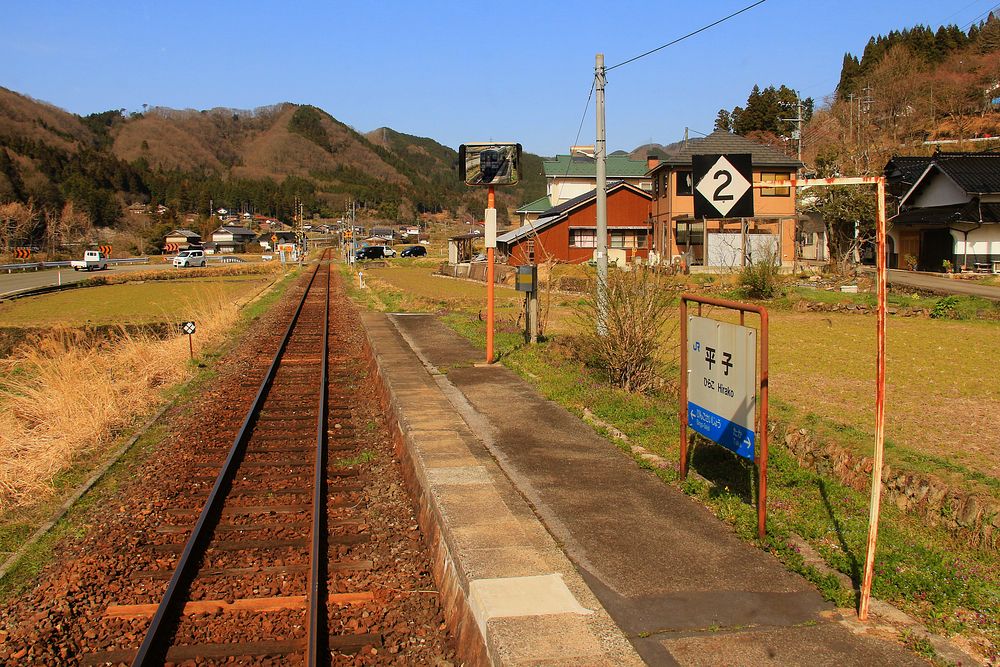 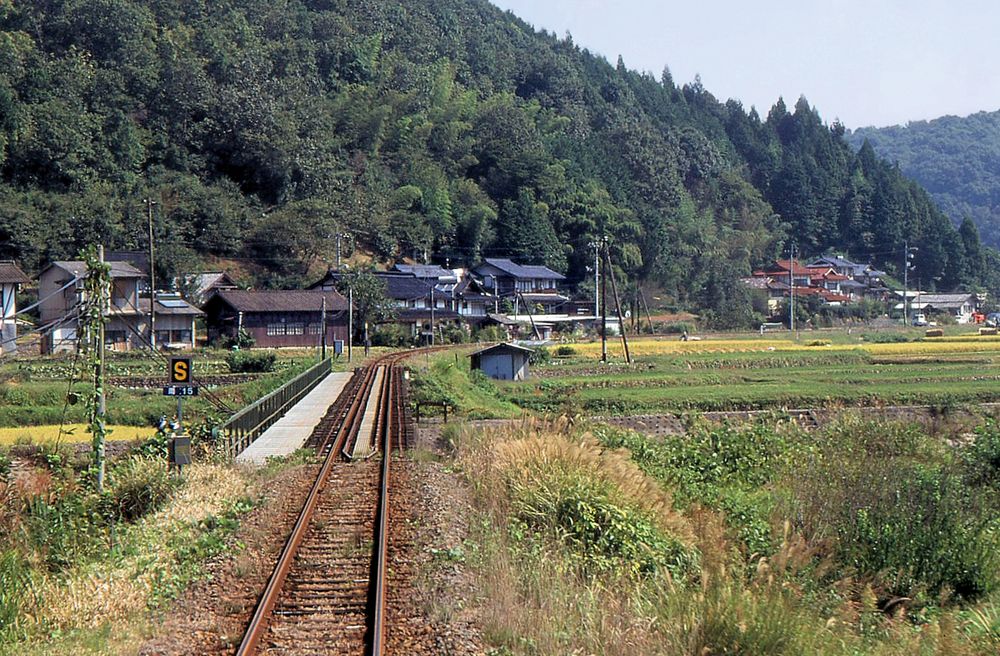 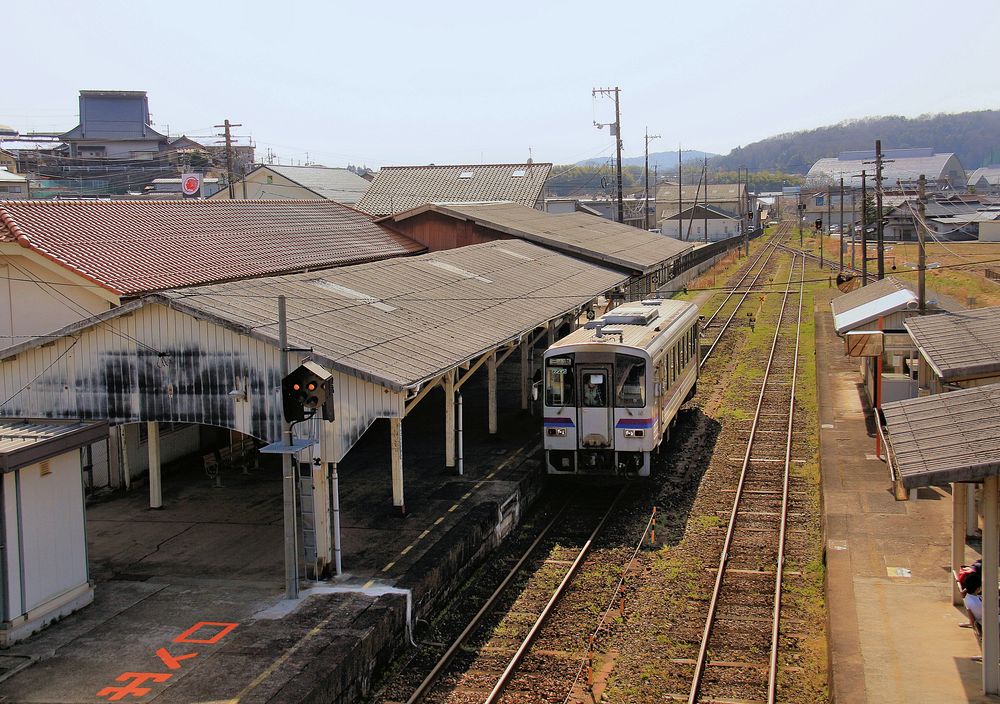 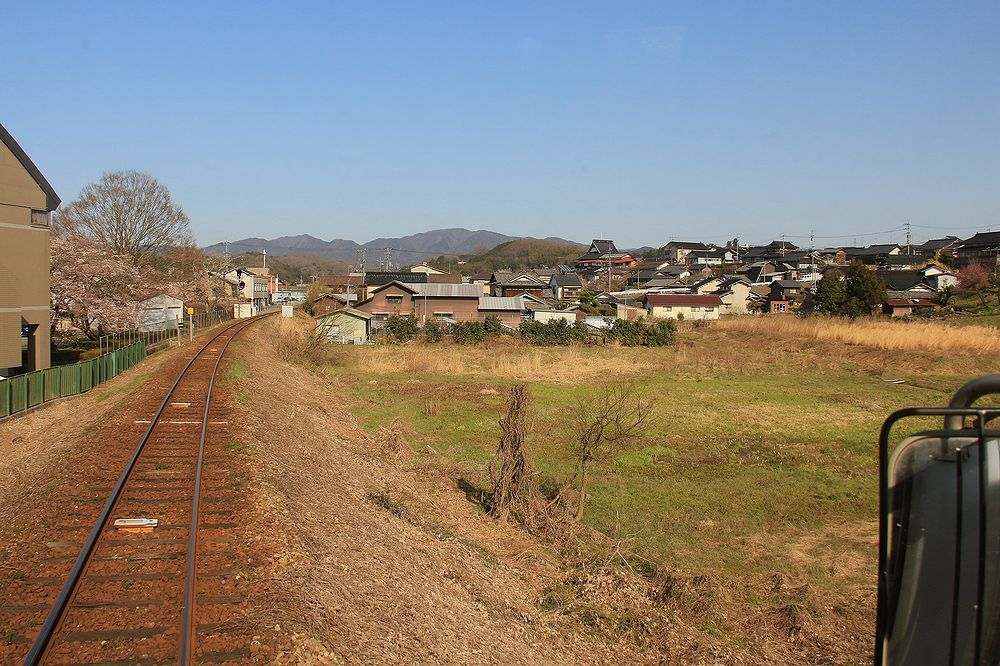 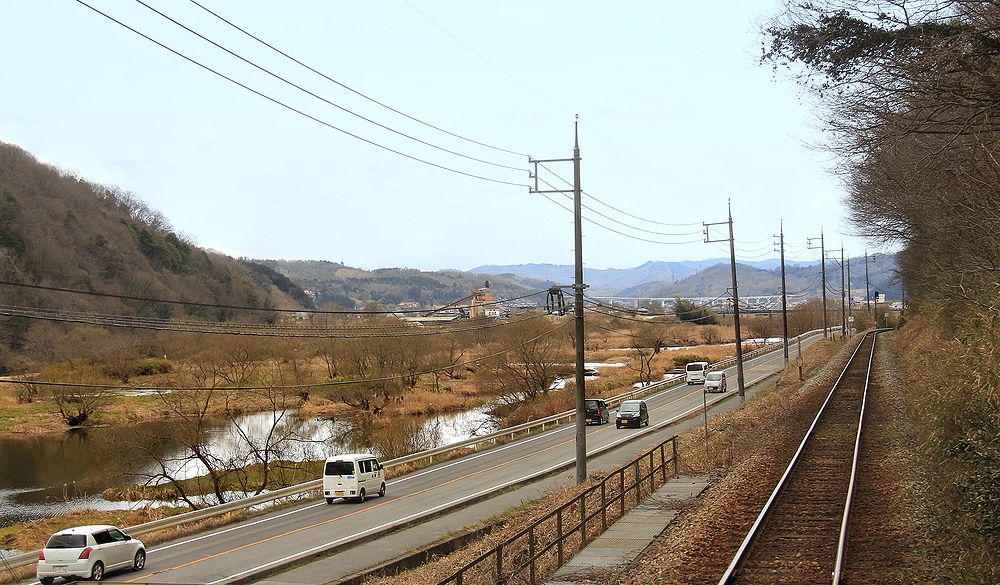 Between Miyoshi and Shiomachi, near Kamisugi. A little further on the Geibi-sen branches off up the valley, while the Fuku'en-sen goes down to Fukuyama. (2017) 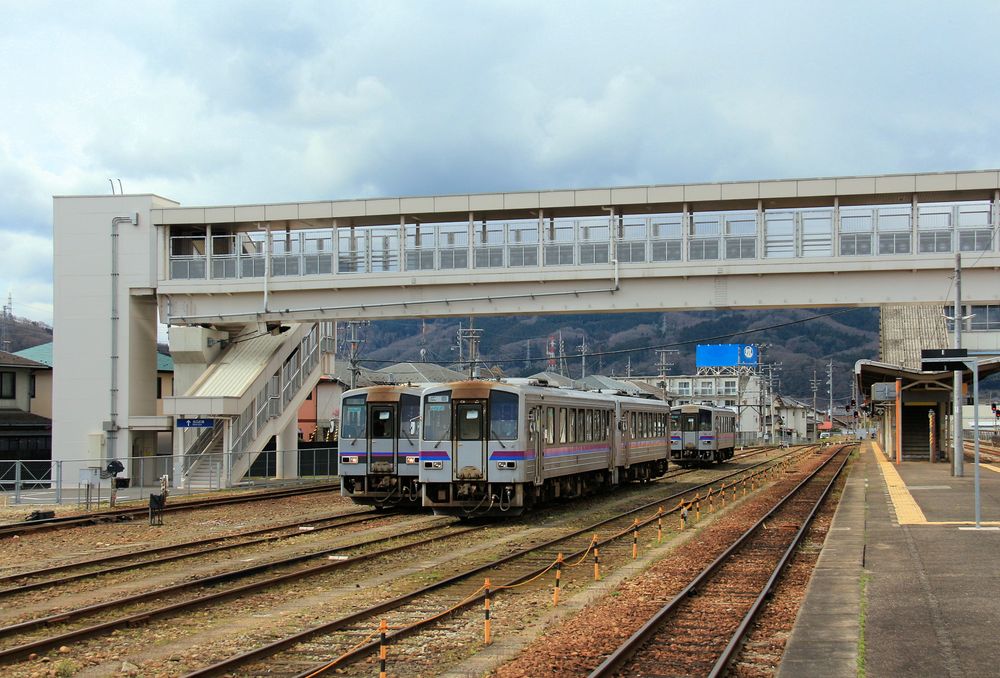