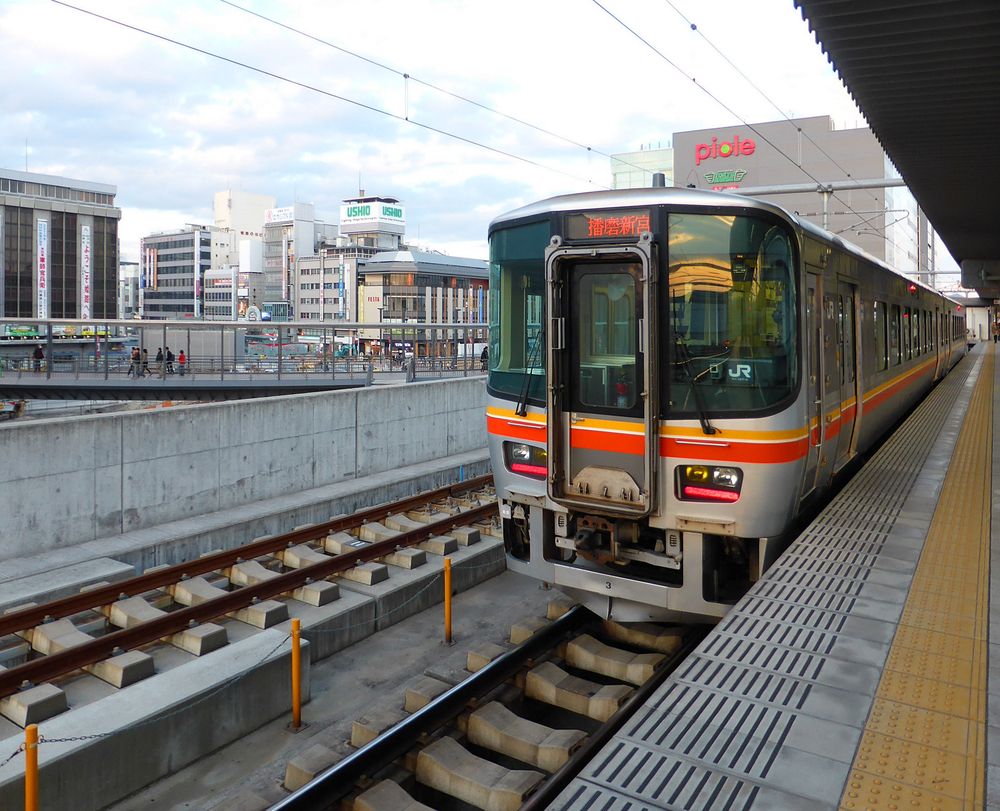 The Kishin-sen is divided into 4 individual sections, which have their own operating characteristics. These sections are: 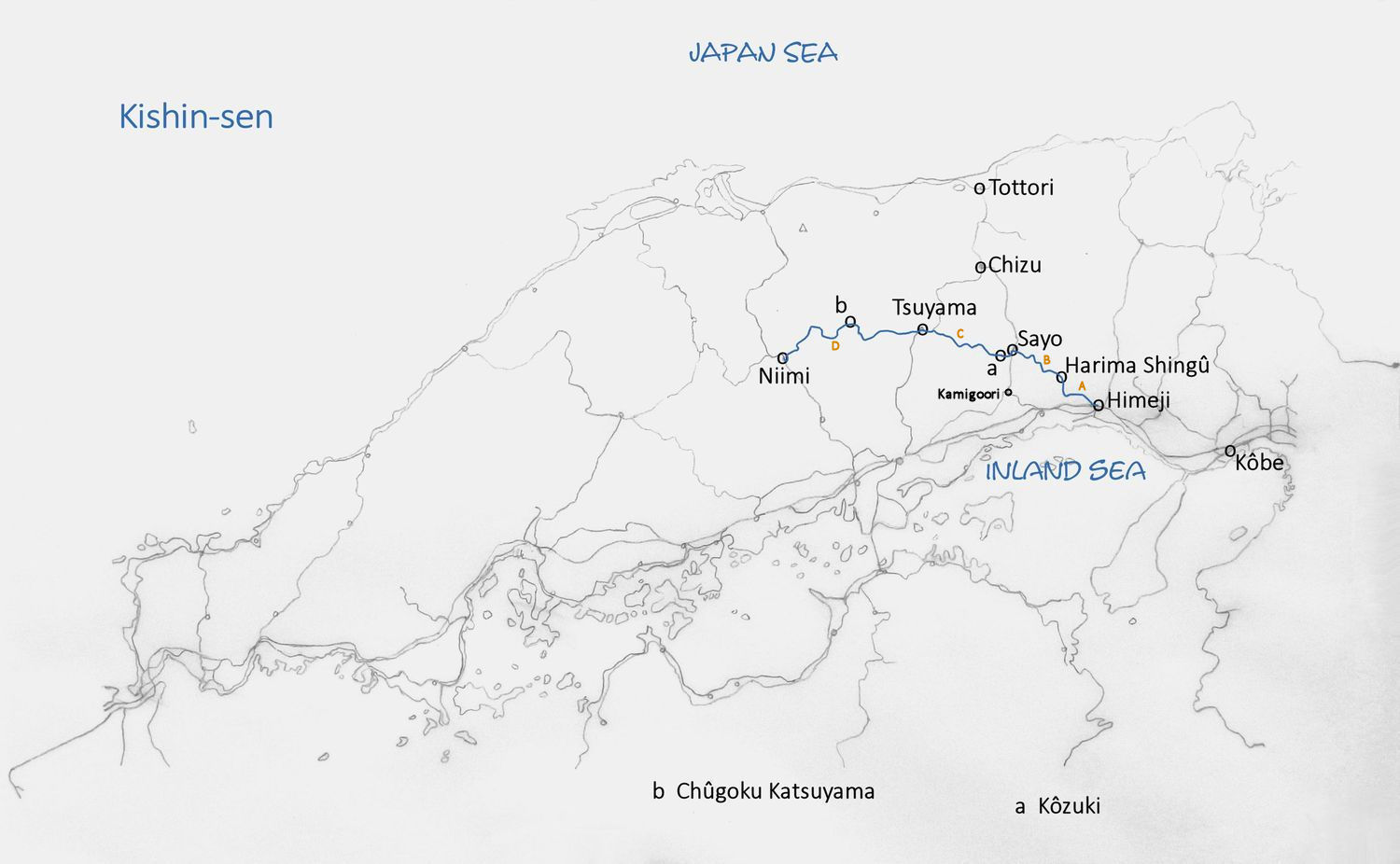 The name of the line refers to the two towns Himeji and Niimi, which it appears to connect; however, there are no through trains. Himeji (written 姫路）is an important population centre not very far from the metropolitan area of Kôbe and Ôsaka. Niimi (written 新見）on the other hand is a small town in the centre of the western Japanese mountains and a railway junction for north-south and east-west travel. The two first characters for Himeji and Niimi (姫 and 新) together are read "Kishin".

Section B serves mainly the farming villages up the valley and through the mountains to Sayo. Since 1994, Sayo forms the junction with the new private Chizu Kyûkô express railway line, which cuts straight across western Japan and gives fast access from Kyôto, Ôsaka and Kôbe via Kamigoori, Sayo and Chizu to the city of Tottori on the Japan Sea. Before the Chizu Kyûkô was built, stopping as well as express trains to Tottori had to take the winding Kishin-sen up to Tsuyama, reverse there and continue over the steep Inbi-sen to their destination.

Section C crosses the mountains from Sayo into the Tsuyama plateau and to Tsuyama town, practically all the way in agricultural surroundings.

Section D at first continues from Tsuyama to the west across or along numerous rivers that flow down from the mountain range dividing western Japan into a southern and a northern side. After working its way through the Chûgoku Katsuyama basin the Kishin-sen then tackles severe inclines through dense forests and sparsely populated mountain sides over to Niimi.

Almost on its entire length the Kishin-sen is paralleled by the Chûgoku Highway, over which there is also a service with highway buses to the large population centres of Japan. This, together with the declining population in all areas served by the Kishin-sen, has turned most of the line into a connection with only minor importance for the region. Particularly sections C and D see only few trains a day, section C has 9 through trains (plus 2 working part of the way), and section D has 6 (plus a few more part of way).

Building of the line took place in small steps between Tsuyama and Niimi between 1923 and 1930, and between Tsuyama and Himeji between 1930 and 1936. Freight services ceased in 1987. In the summer of 2009 very severe flooding particularly in the Sayo region destroyed many of the settlements as well as the railway line, which had to be closed for several months.

The Kishin-sen is not electrified, but there are hopes for electrification from Himeji to Sayo. 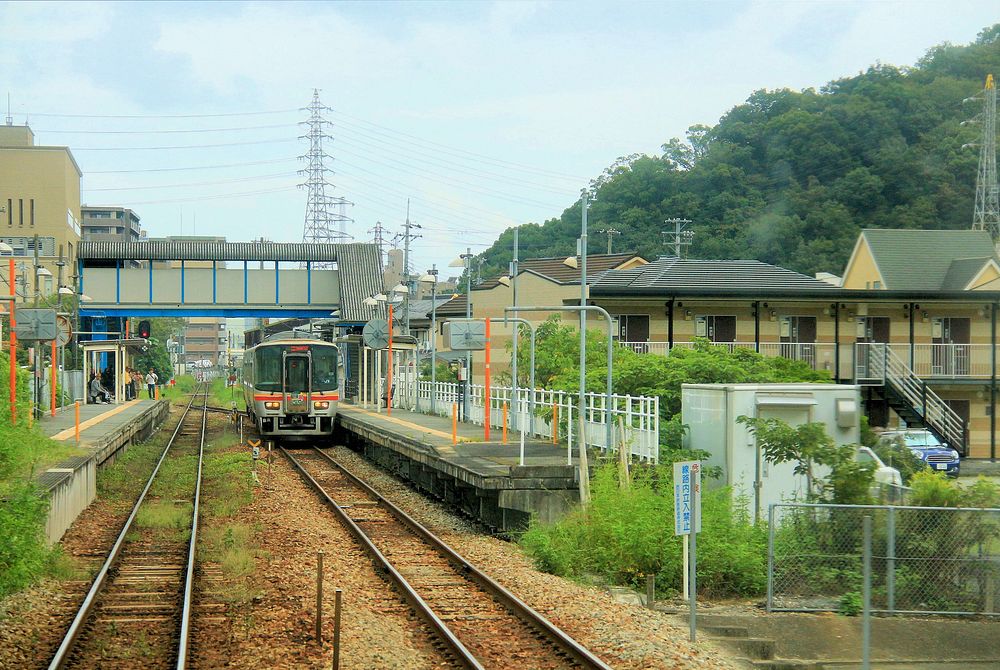 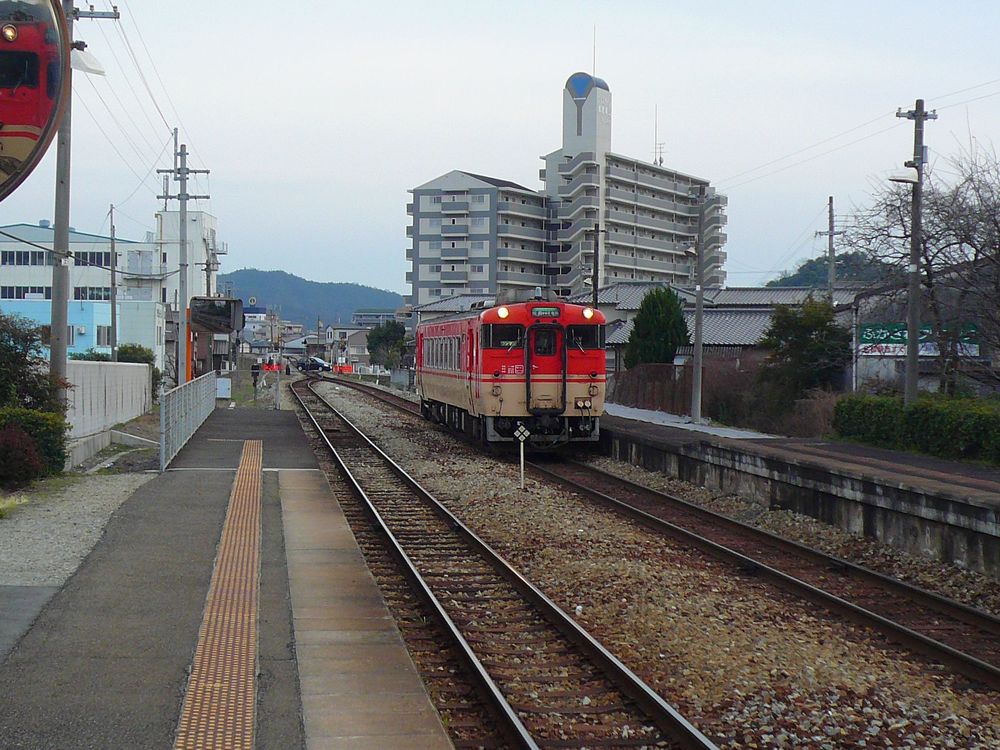 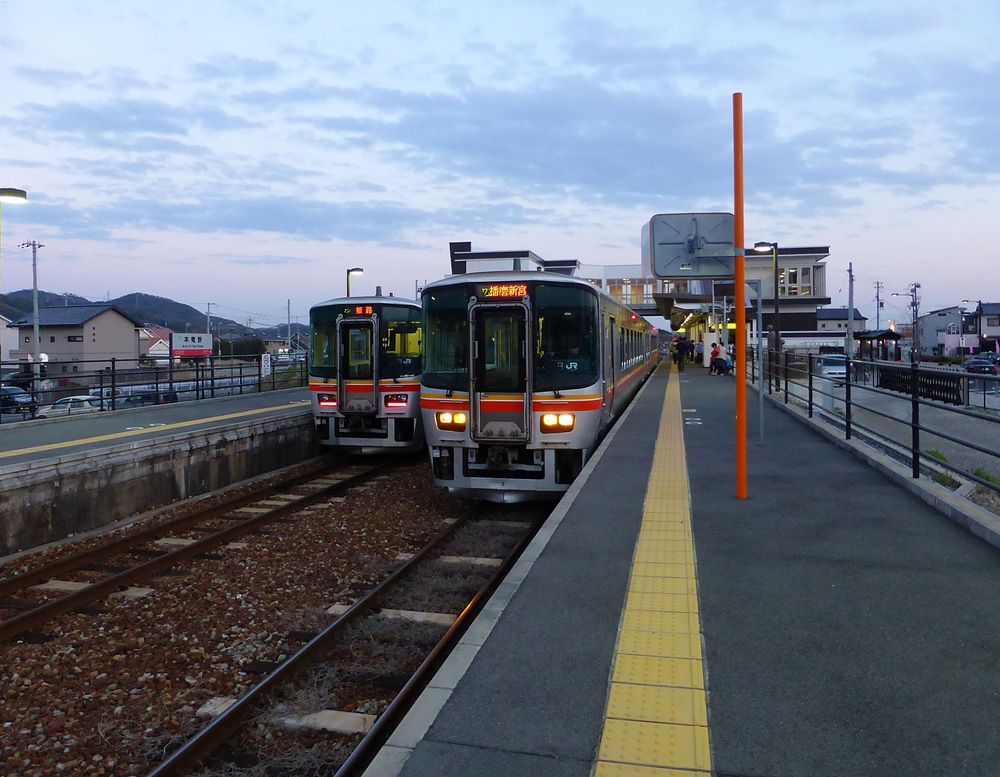 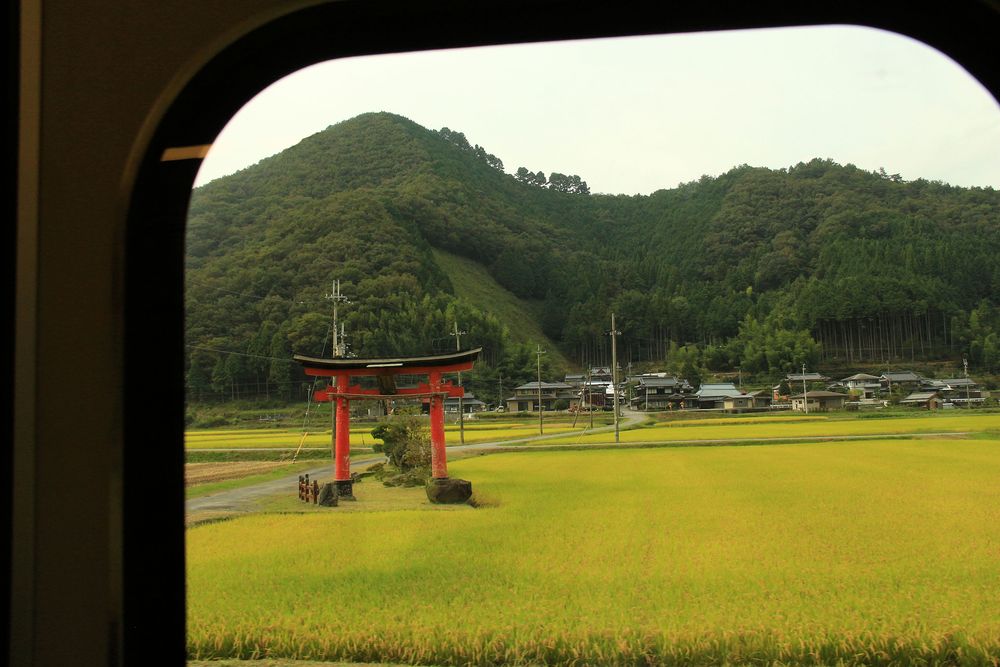 Section B) Harima Shingû to Sayo: Rural landscape in the region of Senbon. (2016) 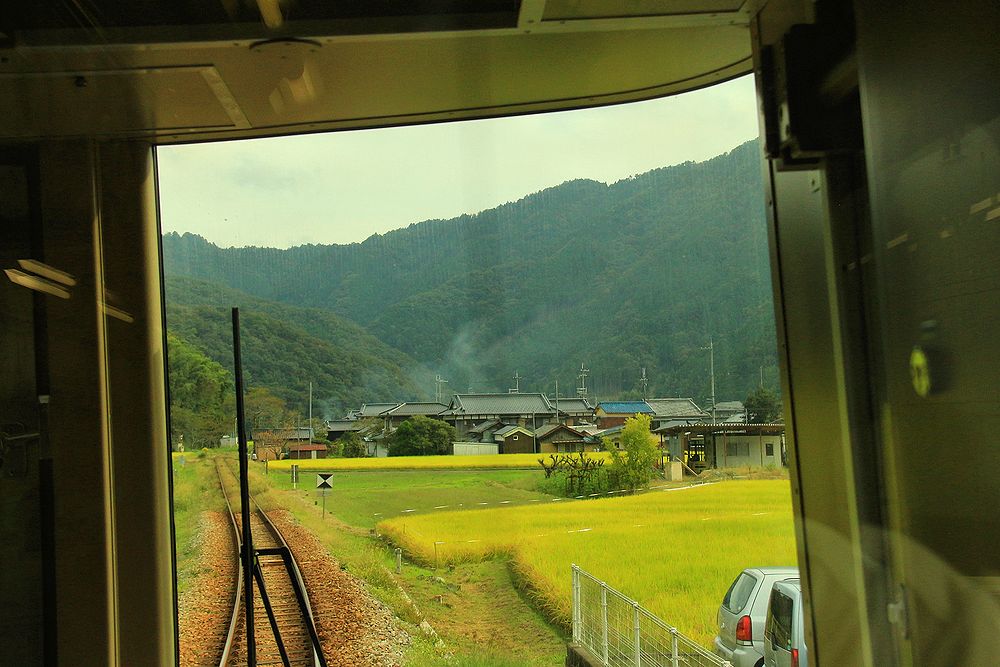 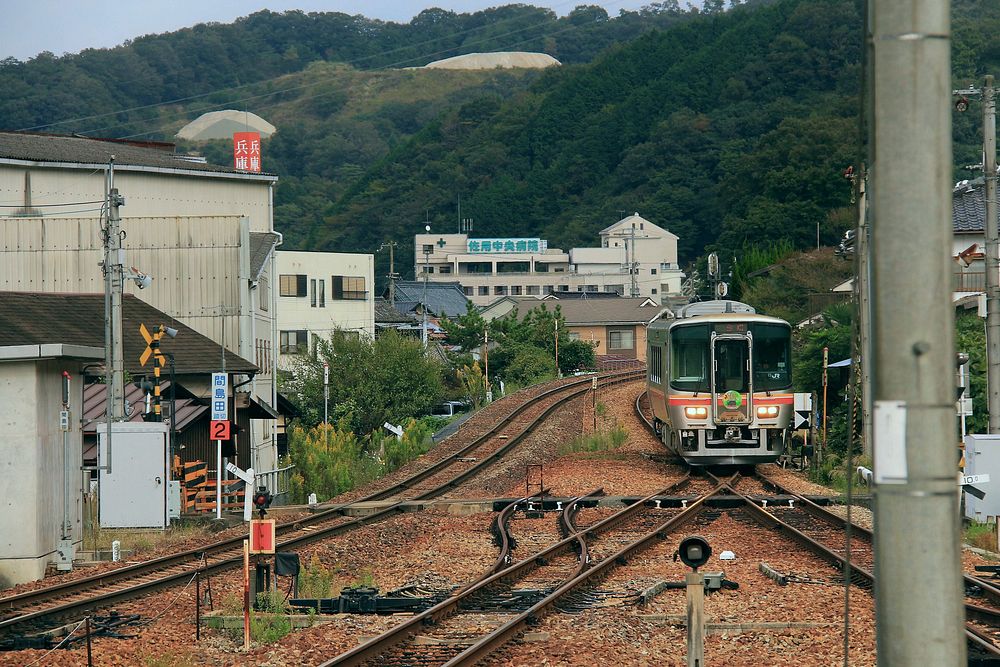 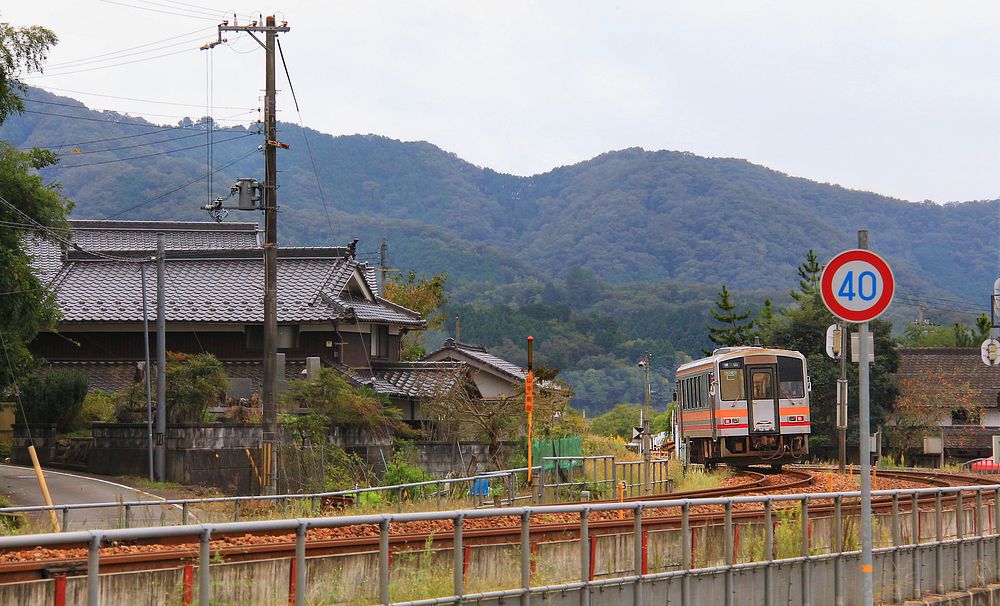 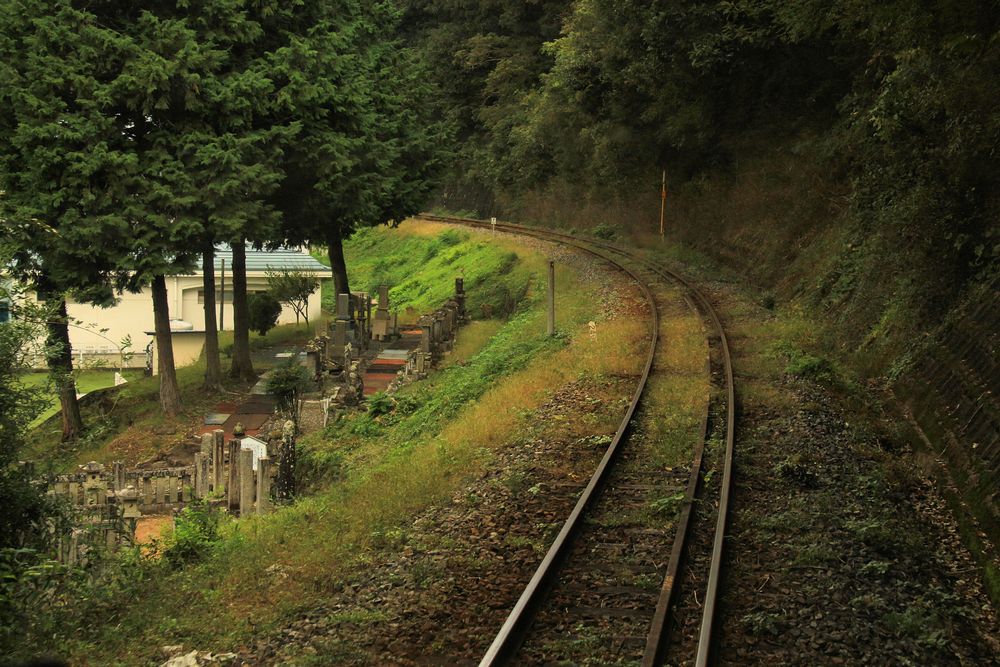 Section C) Sayo to Tsuyama: Many graveyards are located on the hillside near the railway line. Between Kôzuki and Mimasaka Doi on the way up to Tsuyama. (2016) 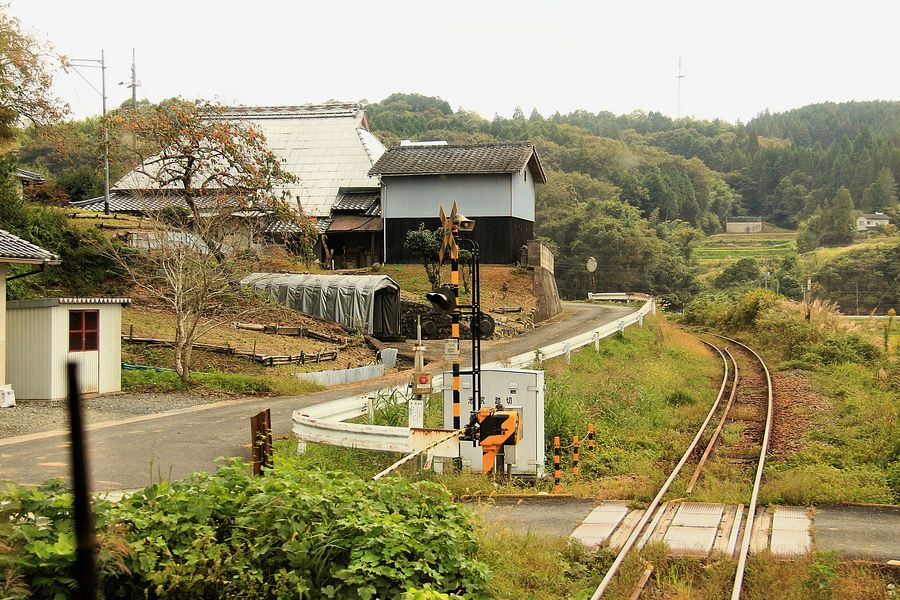 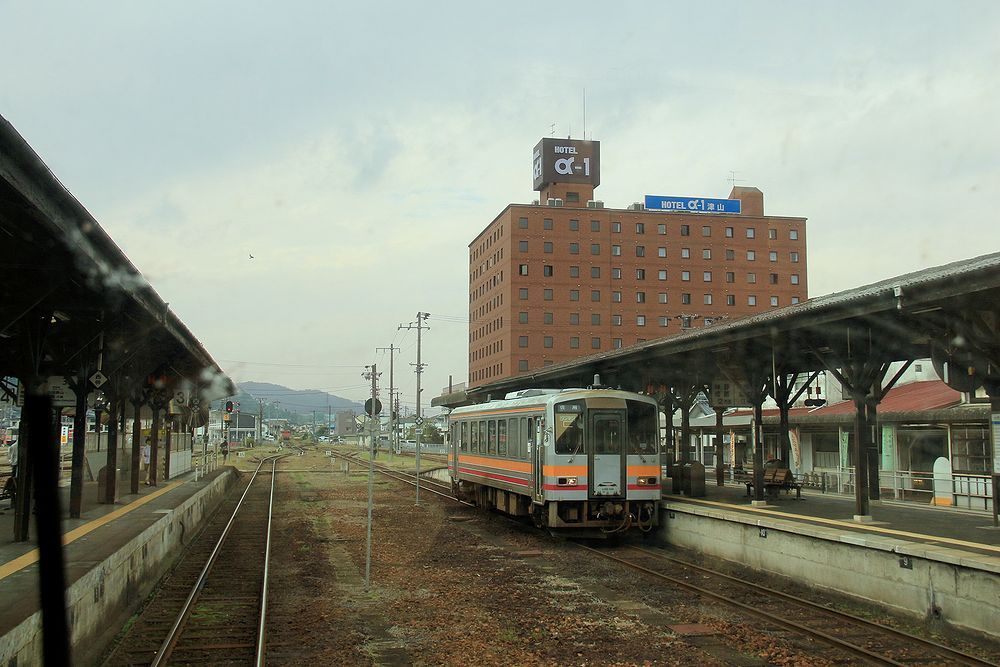 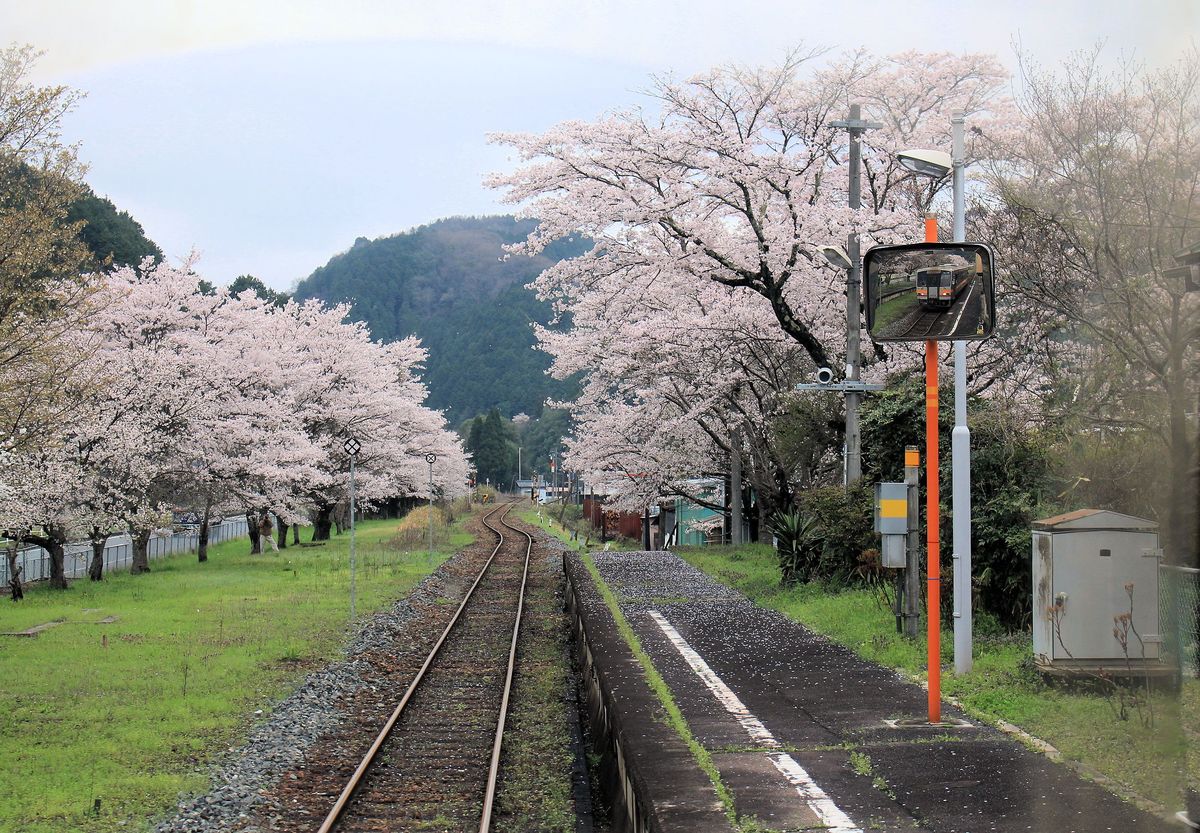 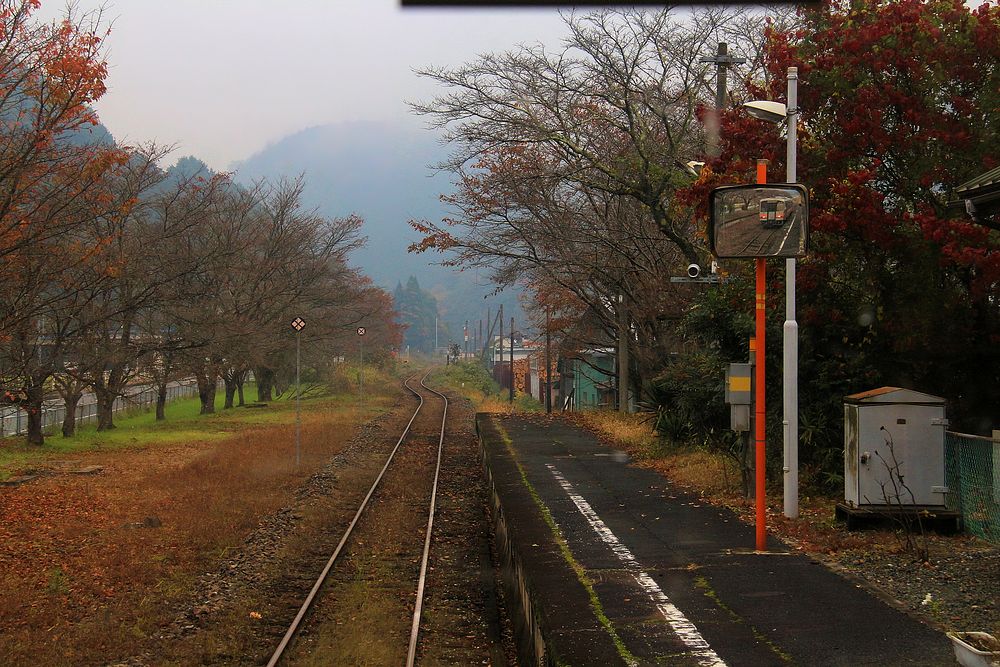 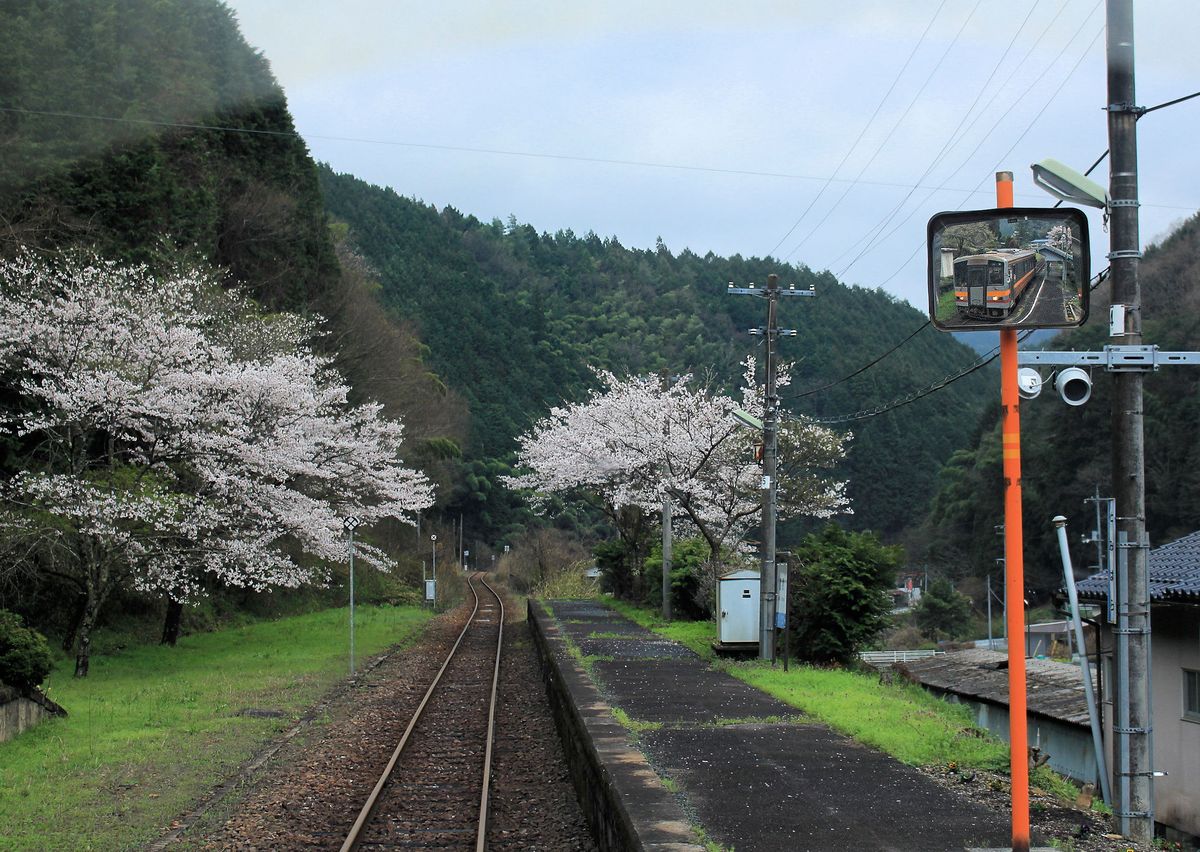 Section D) Tsuyama to Niimi: Diesel car KIHA 120-338 in Tomihara, in the mountains between Niimi and Chûgoku Katsuyama. (2015) 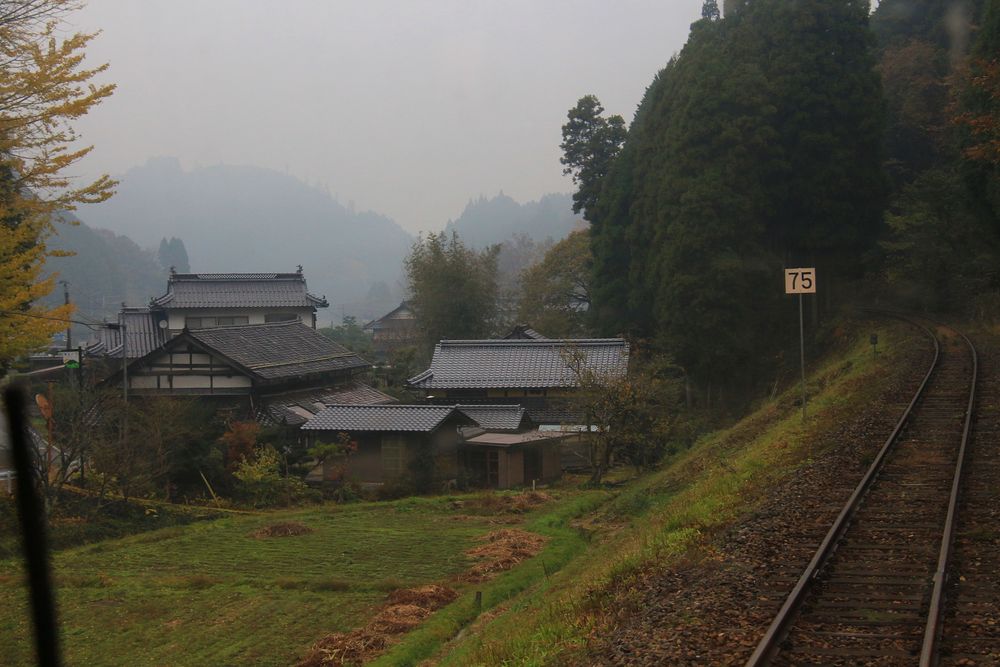 Section D) Tsuyama to Niimi: At Tajibe, between Niimi and Chûgoku Katsuyama. (2017) 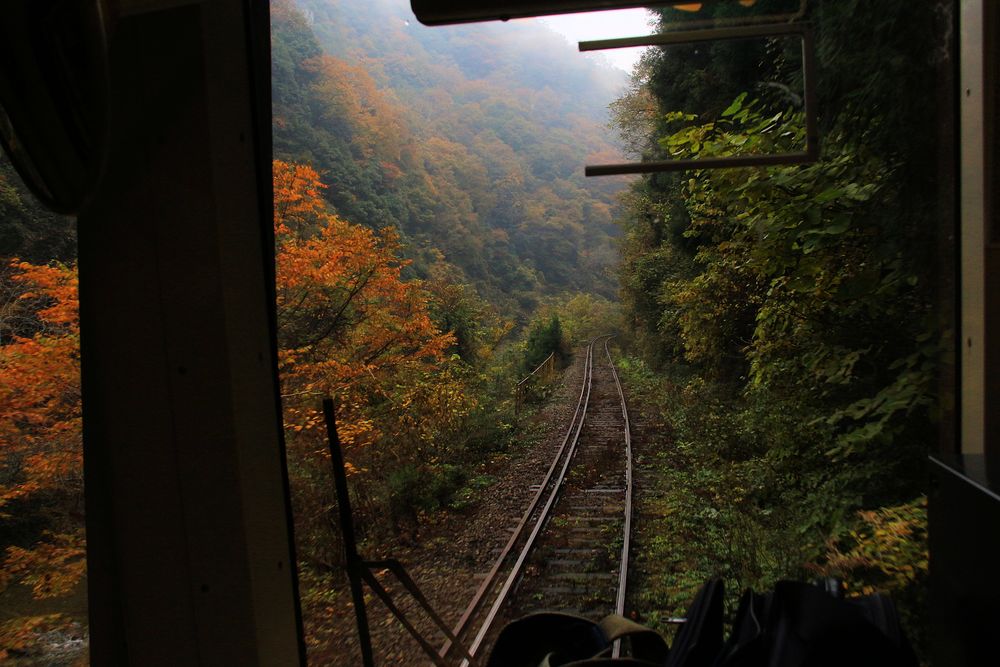 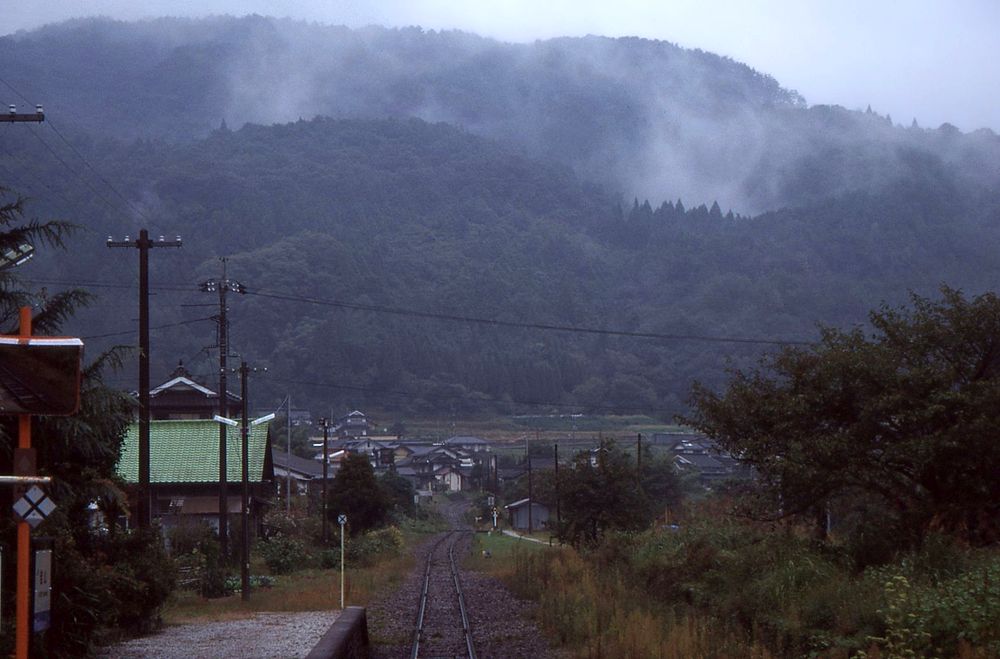 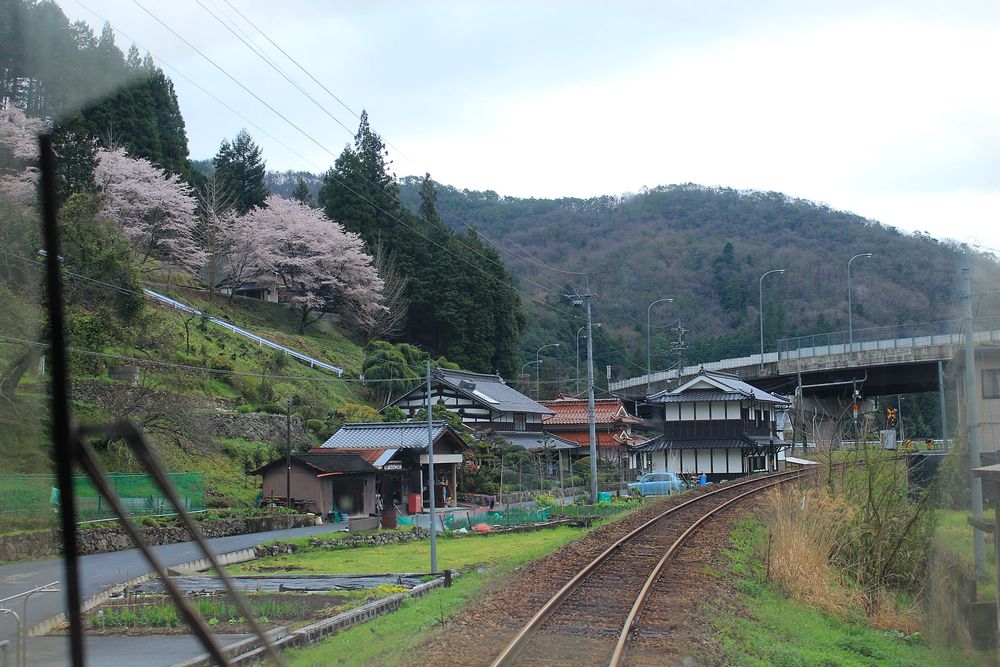 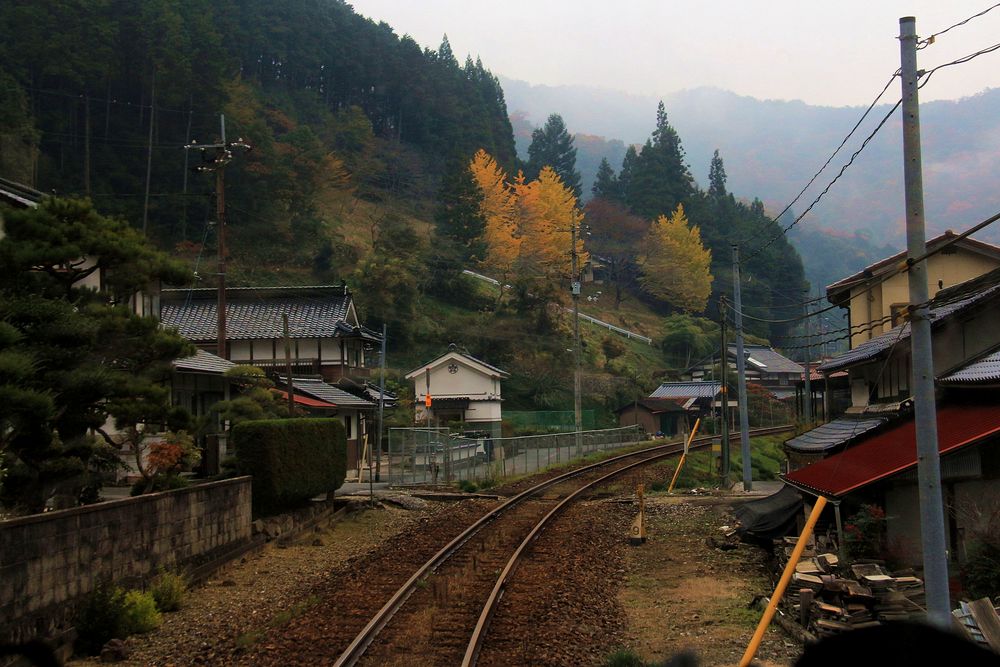 Section D) From the train climbing up from Niimi to Iwayama, the frist halt east of Niimi. (2017)