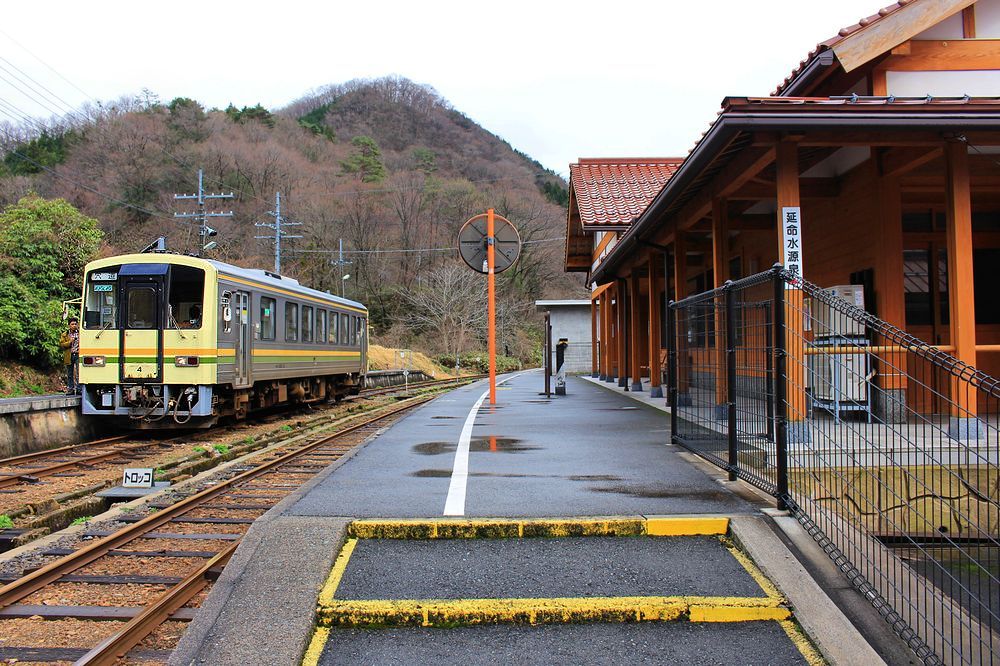 Diesel car KIHA 120 no.4 has come down from the switchback and is waiting at Izumo Sakane to leave for Kisuki and Shinji. (2015)

This interesting line once formed part of a link across the central mountain range of Western Japan from the Inland Sea over to the Japan Sea. Until 1990 an express service ran from Hiroshima to Matsue via the Geibi- and Kisuki-sen. For a long time the Kisuki-sen still remained vital as there was no good road access from the Matsue region up into the rural villages in the Izumo Mountains, particularly during the winter months with very heavy snow fall. Then the central highway was completed (2013) and express bus services between the Inland Sea and the Japan Sea were introduced. Moreover, after electrification and modernisation of the Hakubi-sen (1982) all important rail services now took this route across the mountain range. Thus the Kisuki-sen almost completely lost its importance.

The diesel operated Kisuki-sen is 81, 9 km long and climbs up steeply from Shinji (alongside Lake Shinji /Shinji-ko) through the hills of Shimane Prefecture and into the Bingo Ochiai basin deep in the mountains of Hiroshima Prefecture. Bingo Ochiai is a junction, from where today small Geibi-sen rail buses run to the east to Niimi in Okayama Prefecture, and to the west through the interior of Hiroshima Prefecture as far as Miyoshi. In many parts the gradient of the line is 25 ~ 30 o/oo, and speeds do not exceed 25 to 30 km/h.

From Shinji to Kisuki (21, 1 km) traffic through the farming villages is moderate, while from there over some severe gradients and very tight curves to Izumo Yokota (52, 3 km from Shinji) there is only little traffic. In Izumo Yokota begins the mountain section of the line up to Bingo Ochiai, and this includes the famous switchback to gain height above Izumo Sakane (63, 3 km from Shinji). The line's highest point is at 727 m above sea-level at Miinohara (69, 7 km from Shinji), JR West Japan's highest station.

The region is noted for very heavy snowfall in winter, and storms and flooding in summer. Avalanche danger in winter is considerable; in 2005 the line between Izumo Yokota and Bingo Ochiai was closed from Dec. 22 to March 29, 2006. Since 2012 this section is closed practically every year between January and March, and passengers to and from the Miinohara area are taken by taxi.

The full line from Shinji via Kisuki and Izumo Yokota to Bingo Ochiai (and vice versa) is traversed by 2 trains a day, with one further train between Kisuki and Bingo Ochiai. 3 to 4 trains (depending on the season) operate between Shinji and Izumo Yokota, with another 4 between Shinji and Kisuki. In addition, the very popular tourist train "Izumo Orochi", worked by a diesel locomotive and 2 windowless coaches, operates on weekends from April to November. 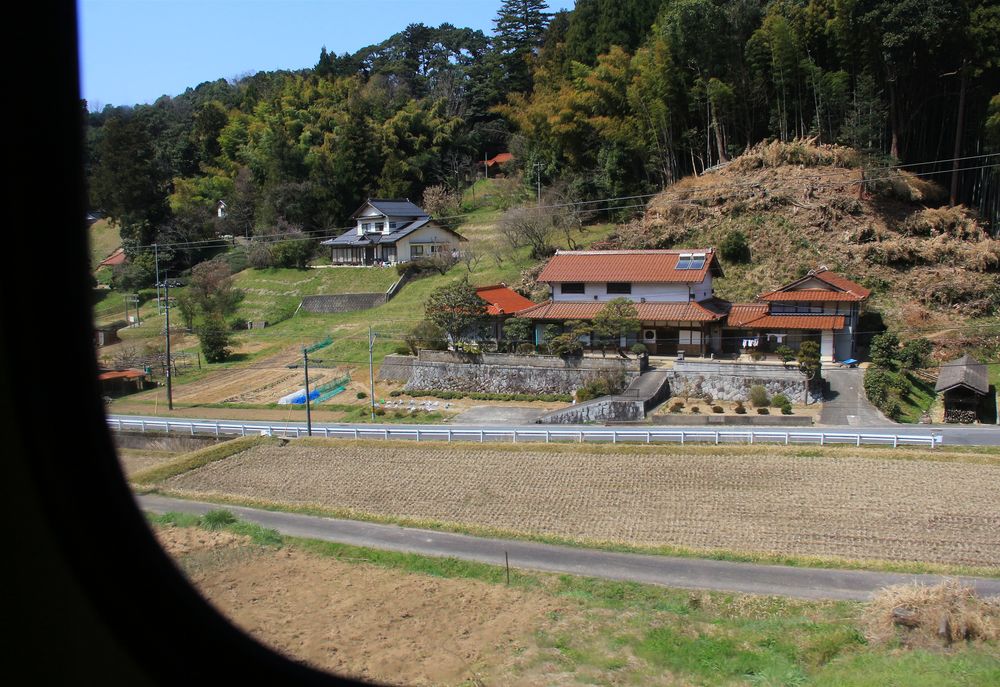 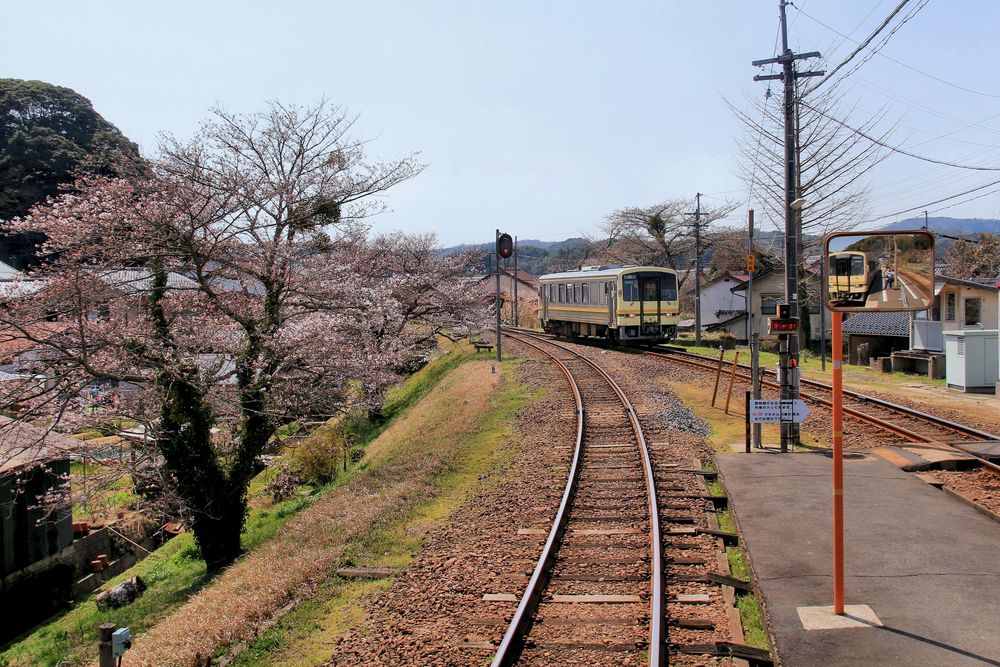 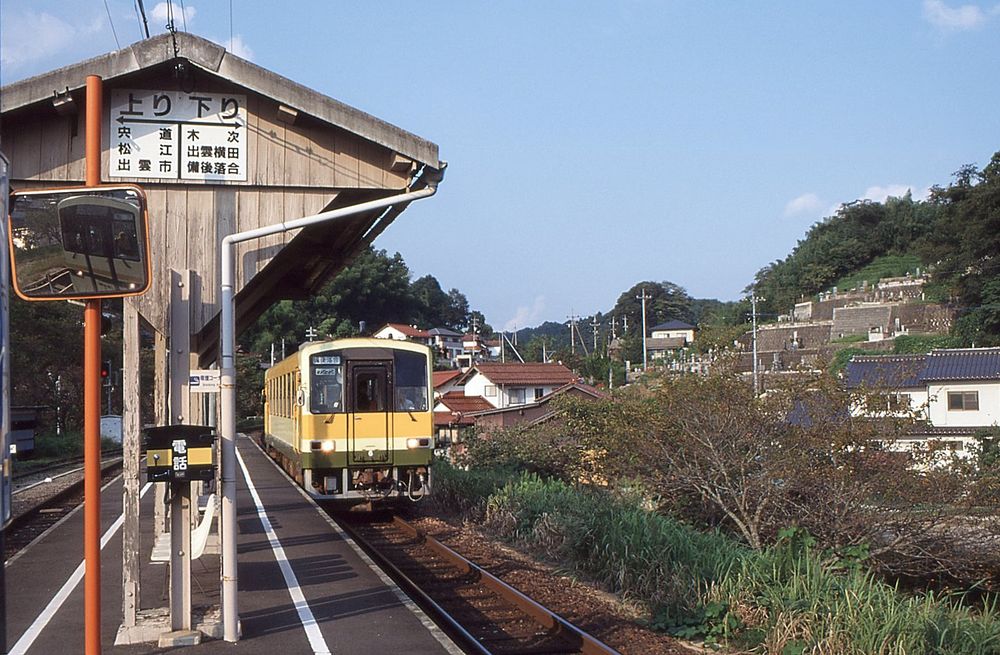 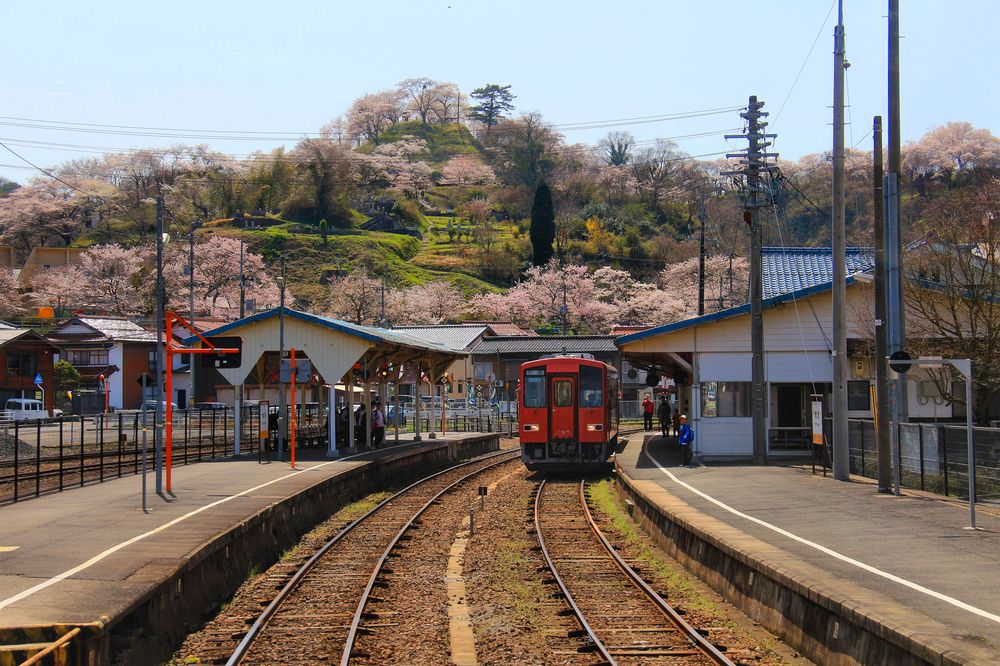 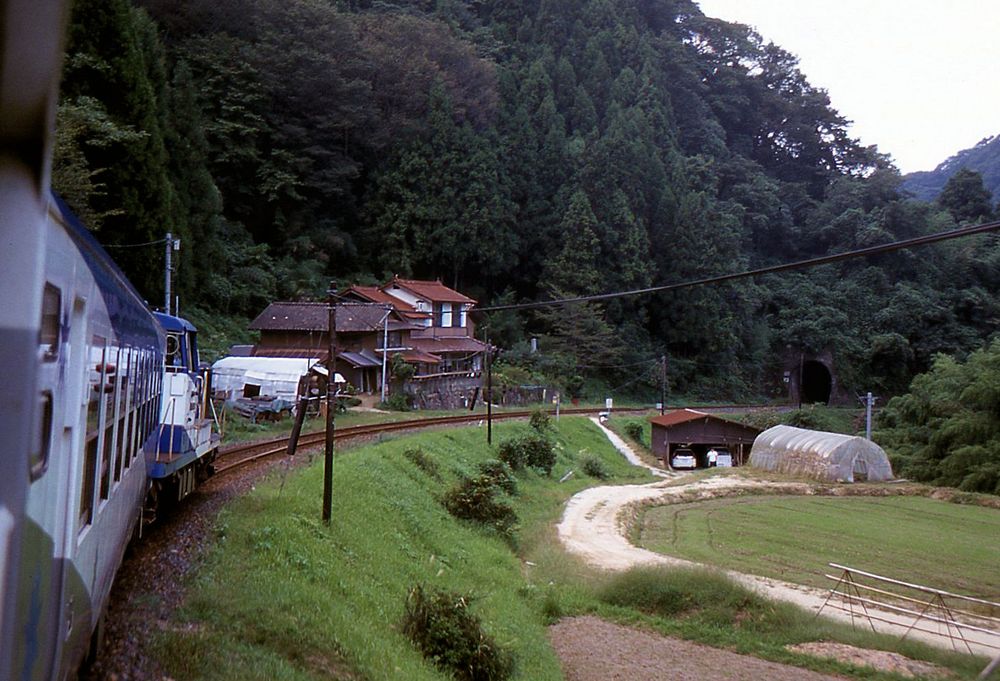 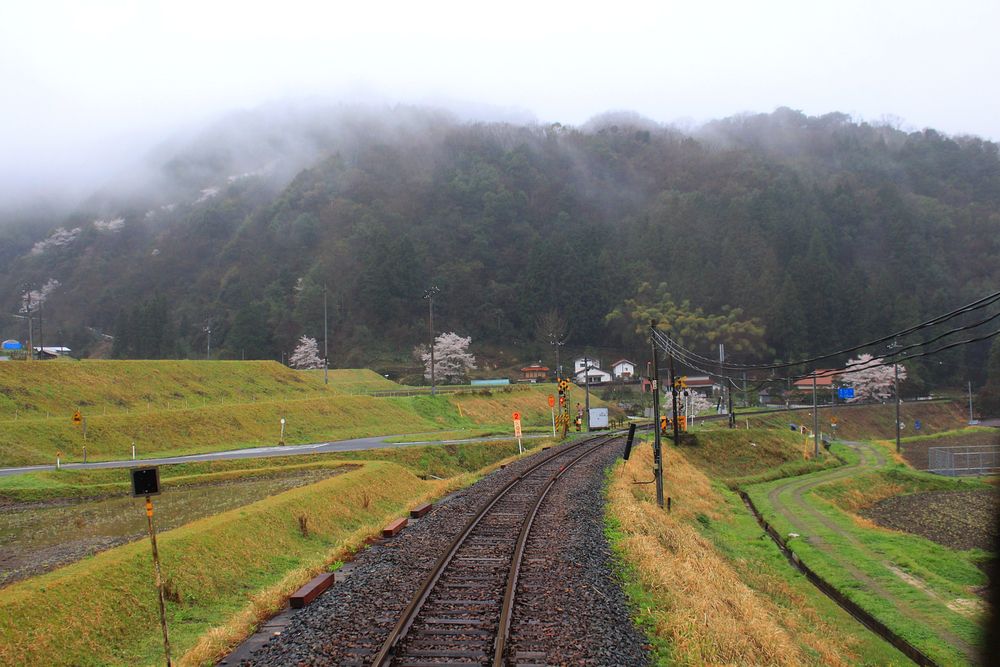 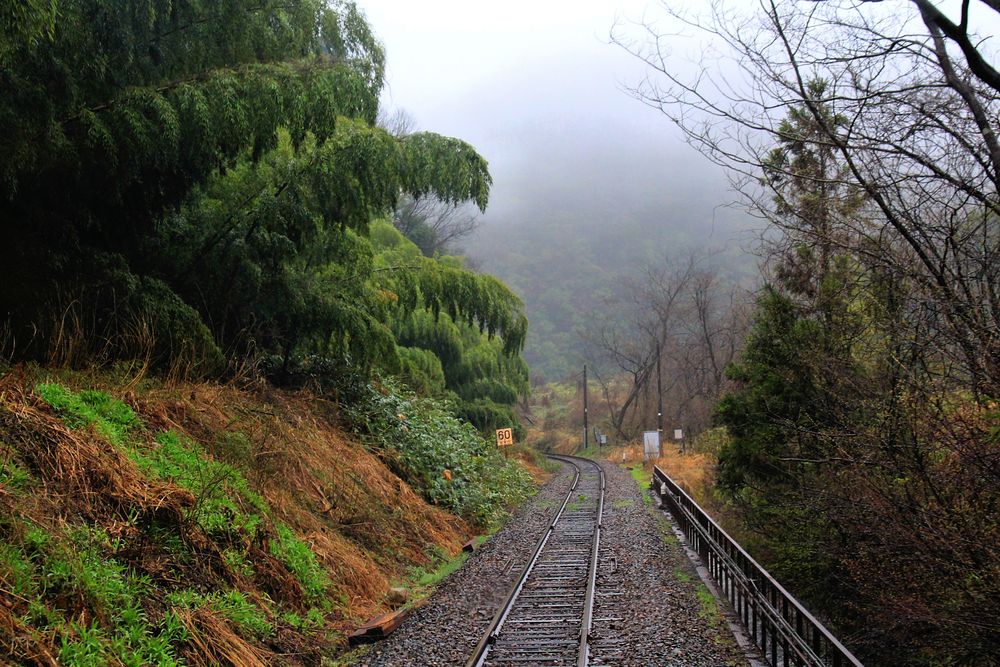 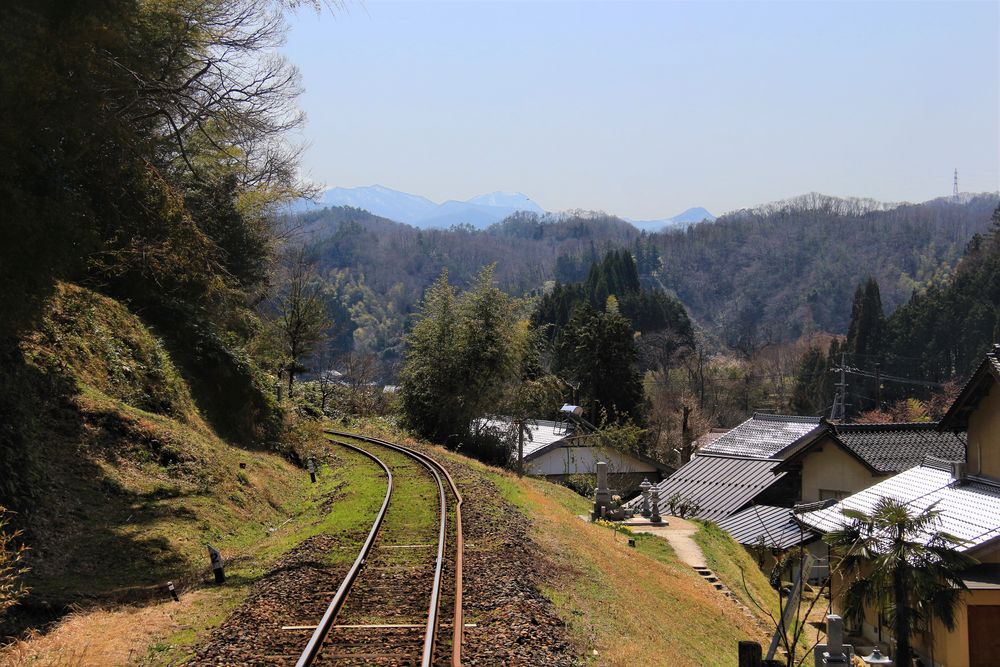 Climbing up into the mountains near Izumo Minari. (2018) 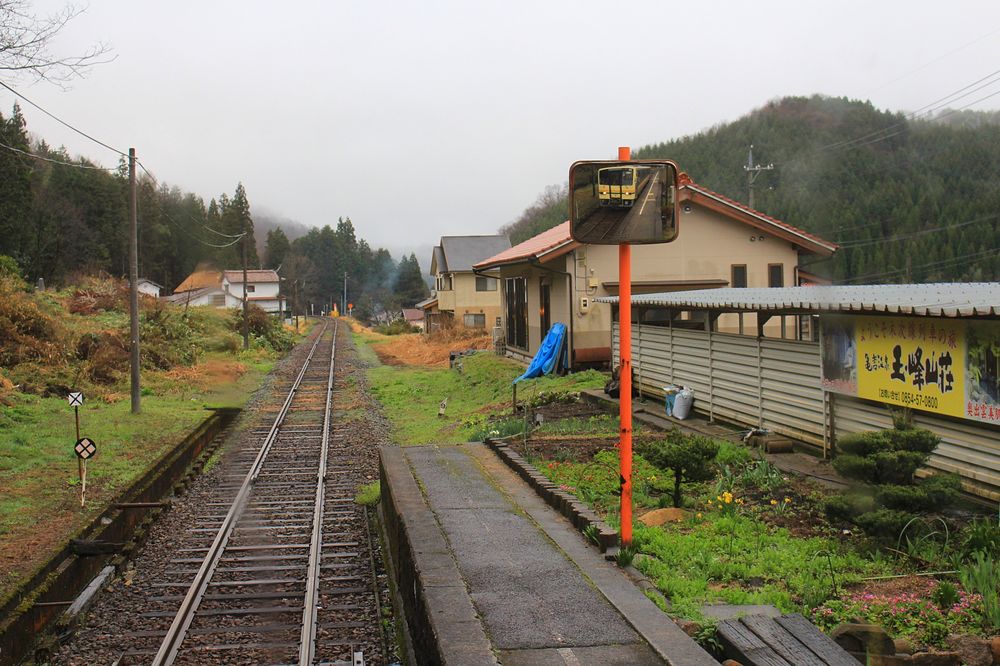 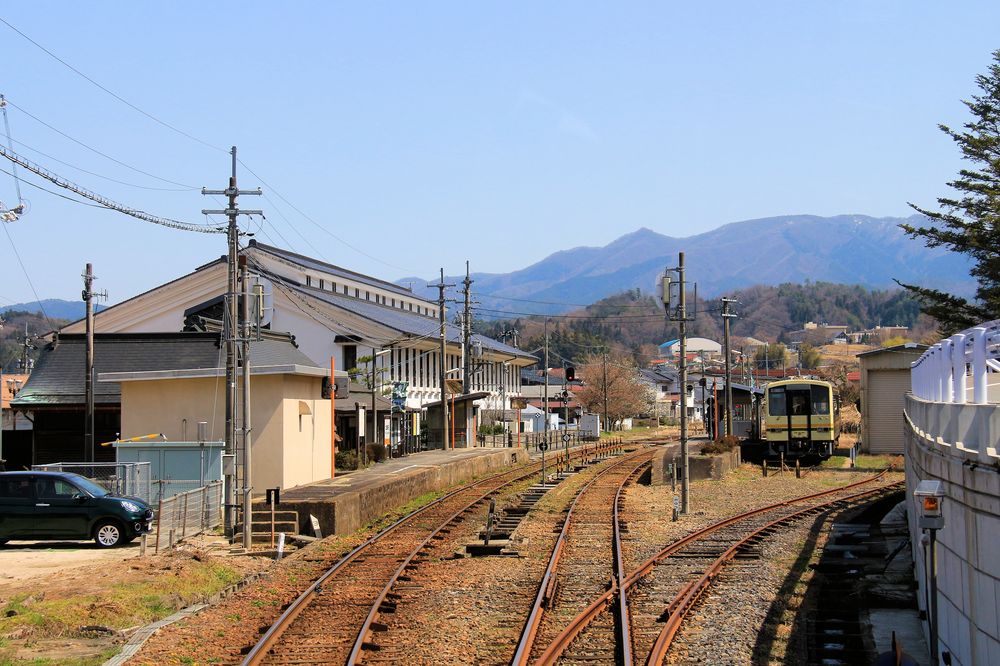 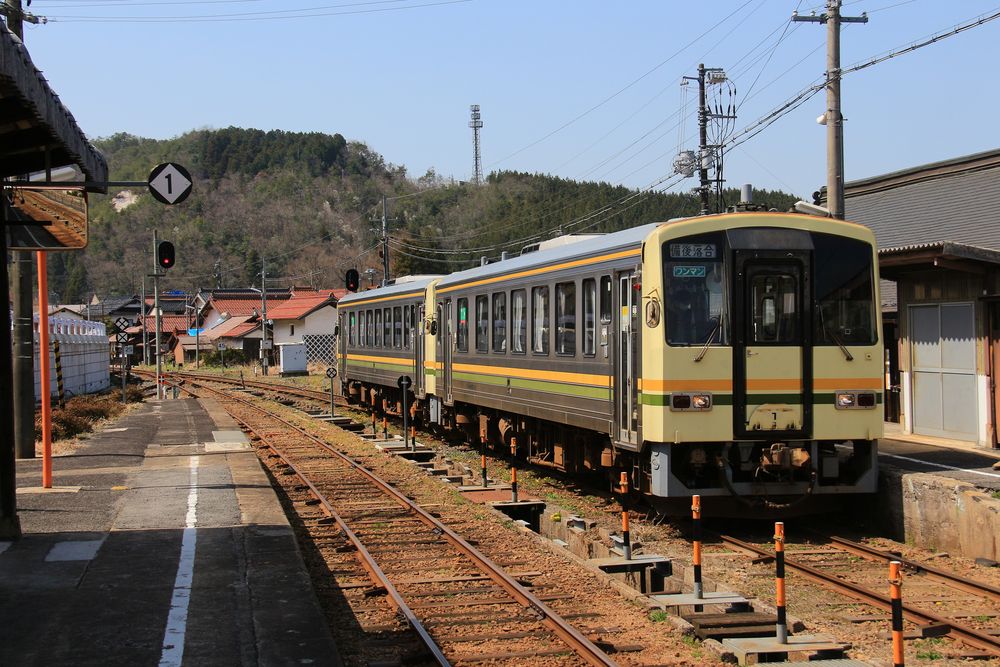 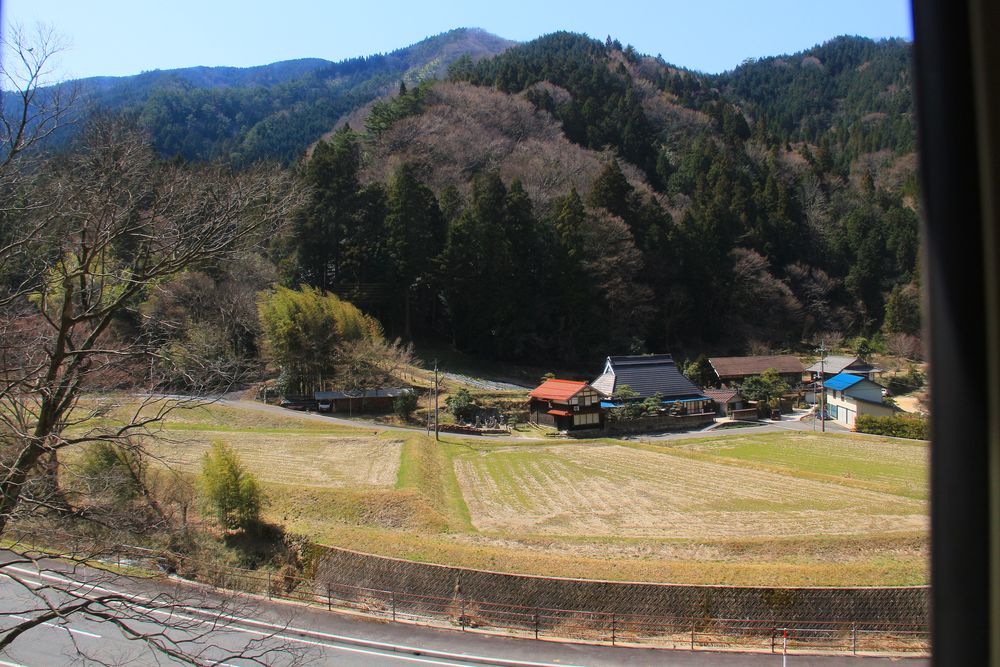 From the train near Yakawa, between Izumo Yokota and Izumo Sakane. (2018) 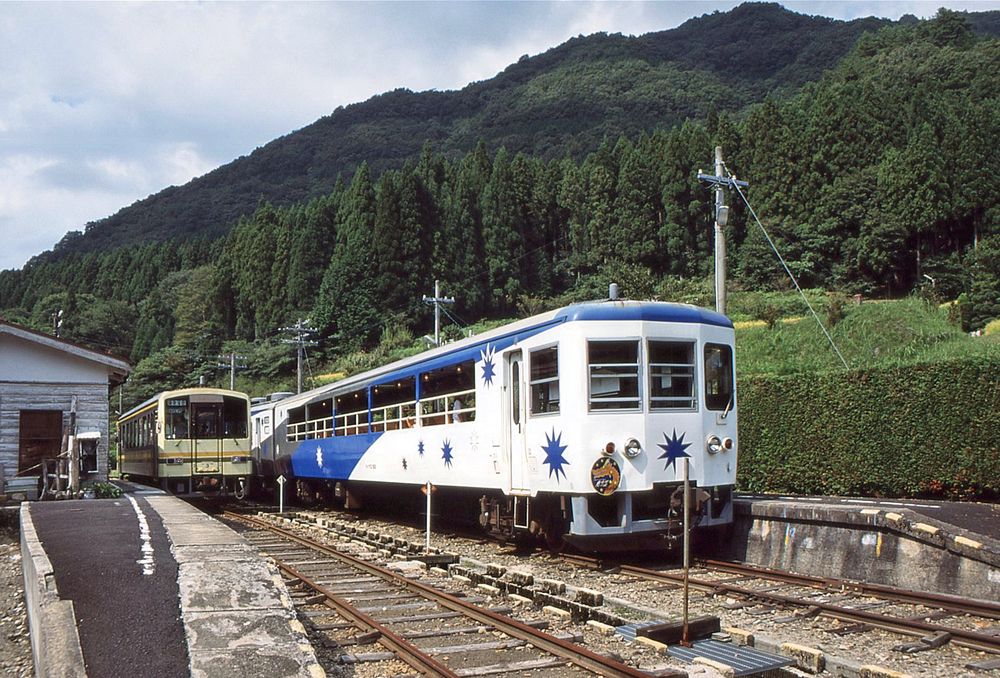 Izumo Sakane, at the bottom of the switchback section. The tourist train "Izumo Orochi" has come down from Bingo Ochiai, while KIHA 120 no.3 is waiting to enter the switchback. (2002) 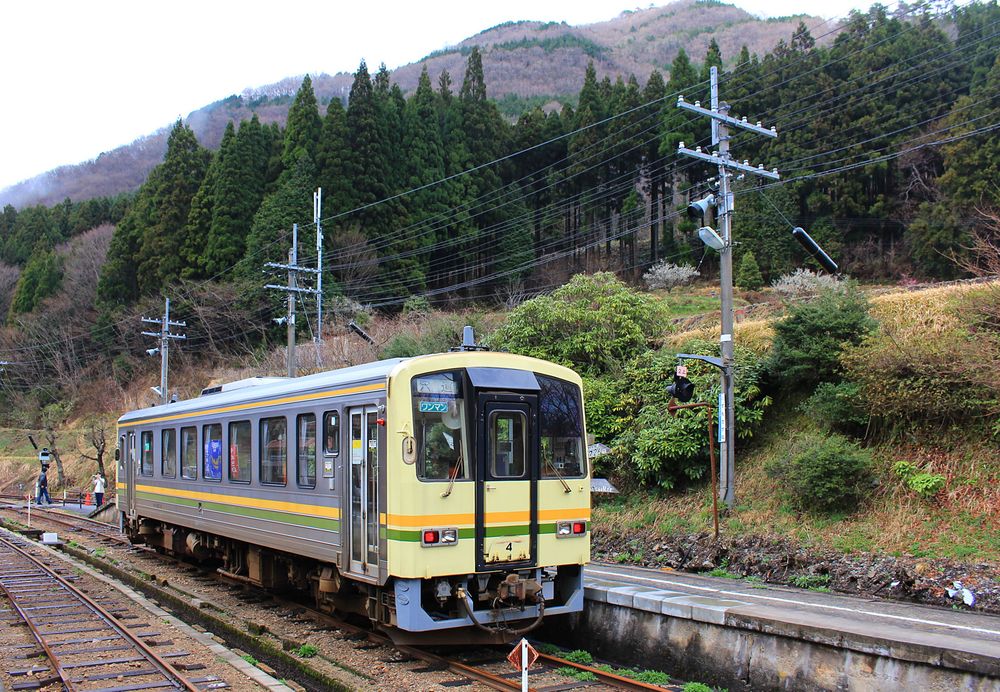 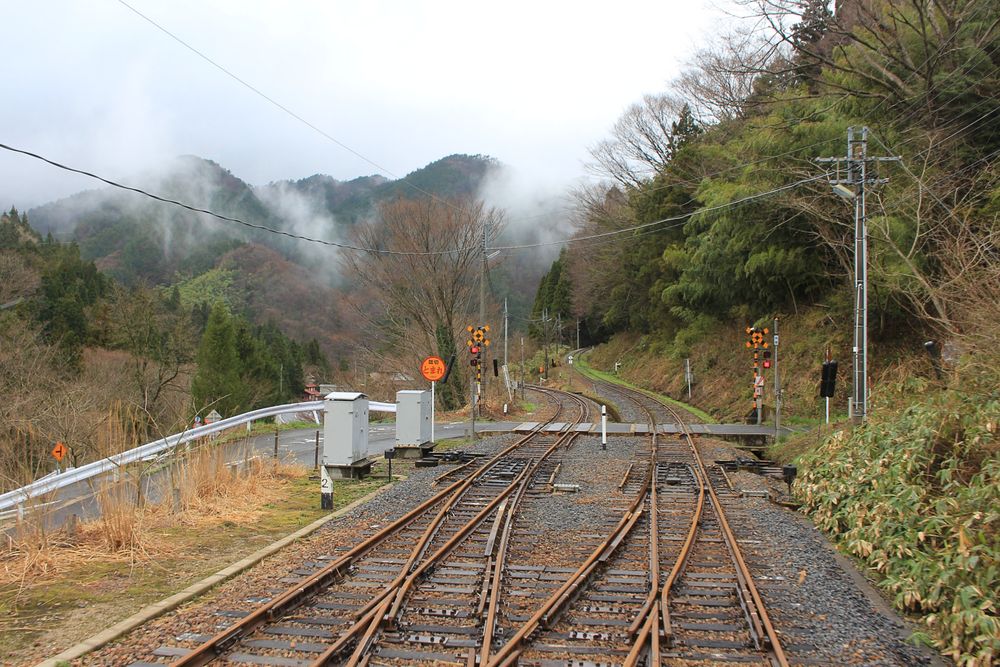 Looking from Izumo Sakane station towards the steep incline up to the switchback. To the left is the line down the valley towards Izumo Yokota. (2015) 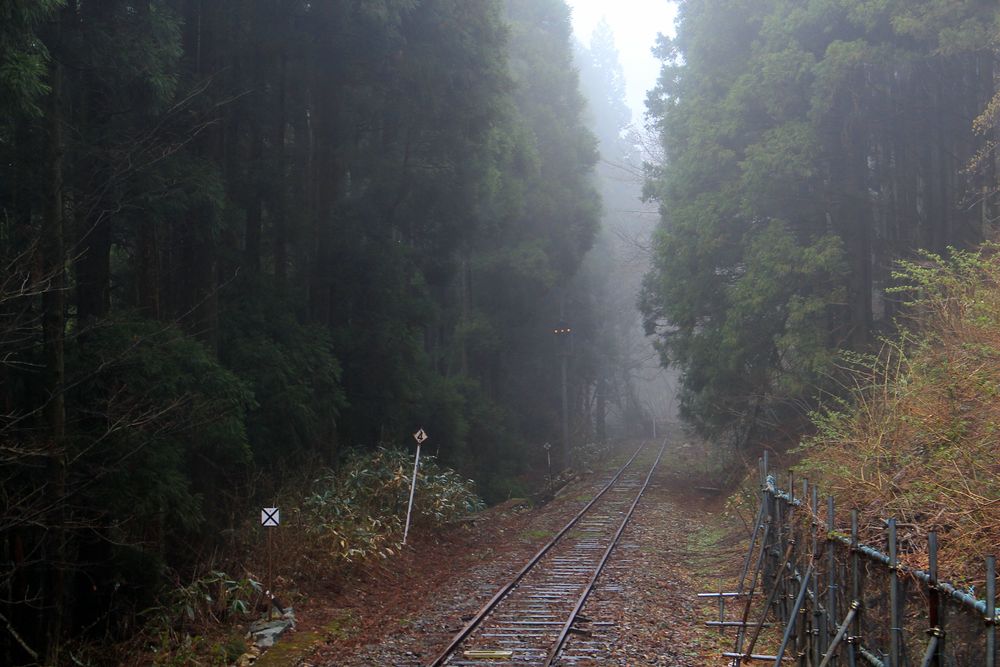 On its way down from Bingo Ochiai the train comes to a stop in the woods, changes direction and heads for Izumo Sakane. (2015) 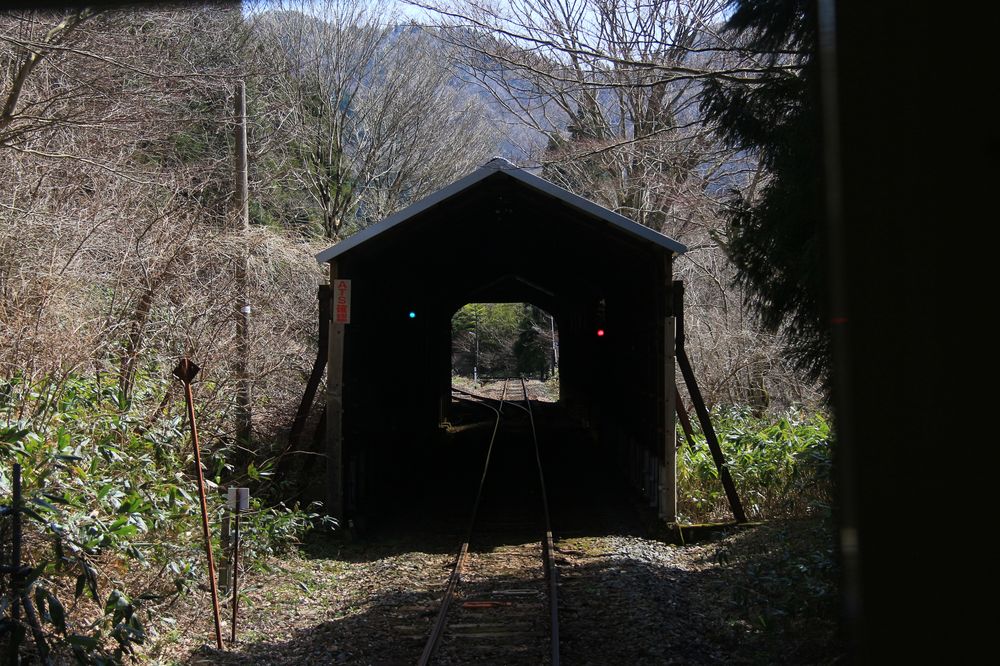 From a train headed for Bingo Ochiai. At the upper switchback stop the signal is green for the onward journey. (2018) 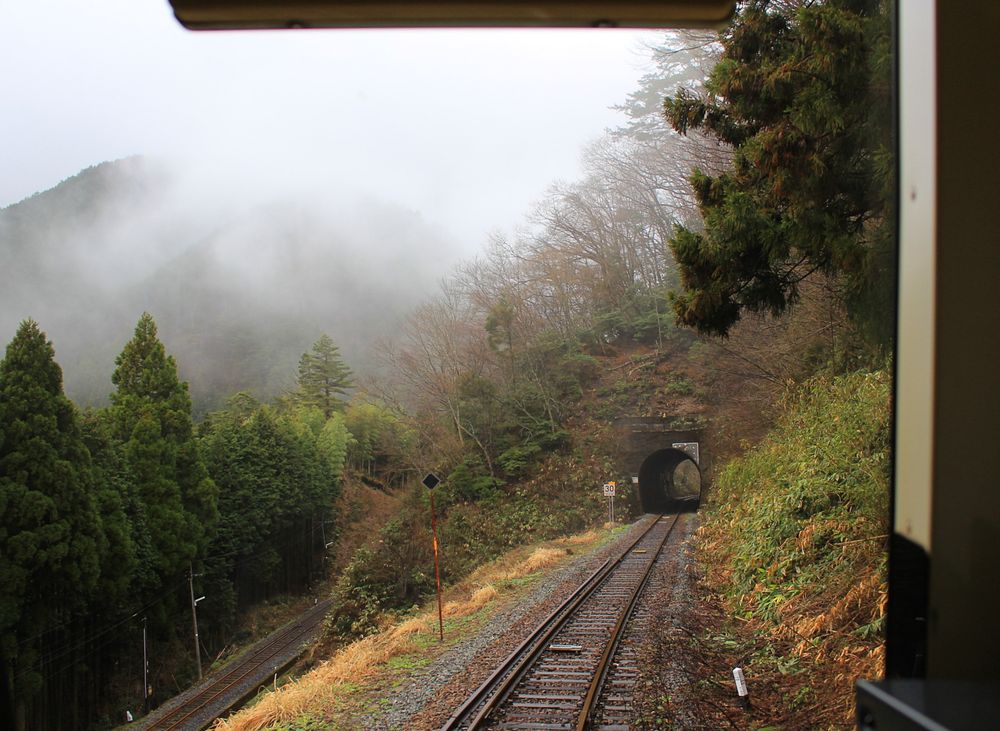 Coming down from Bingo Ochiai the train is nearing the point to reverse. The continuation down to Izumo Sakane can be seen on the left. (2015) 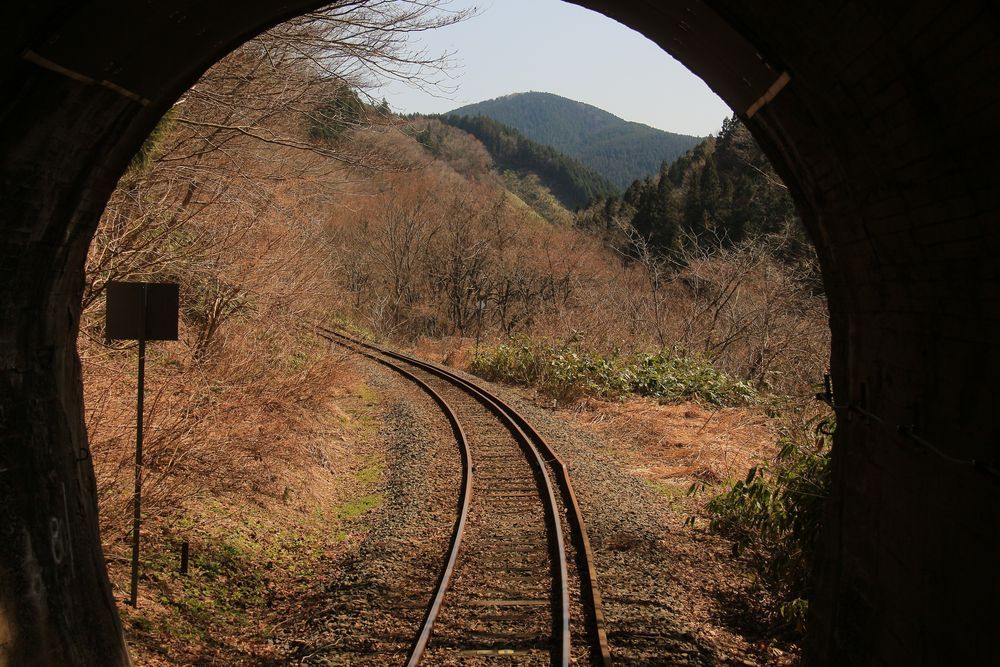 Climbing up towards Miinohara we come into a late-winter landscape. (2018) 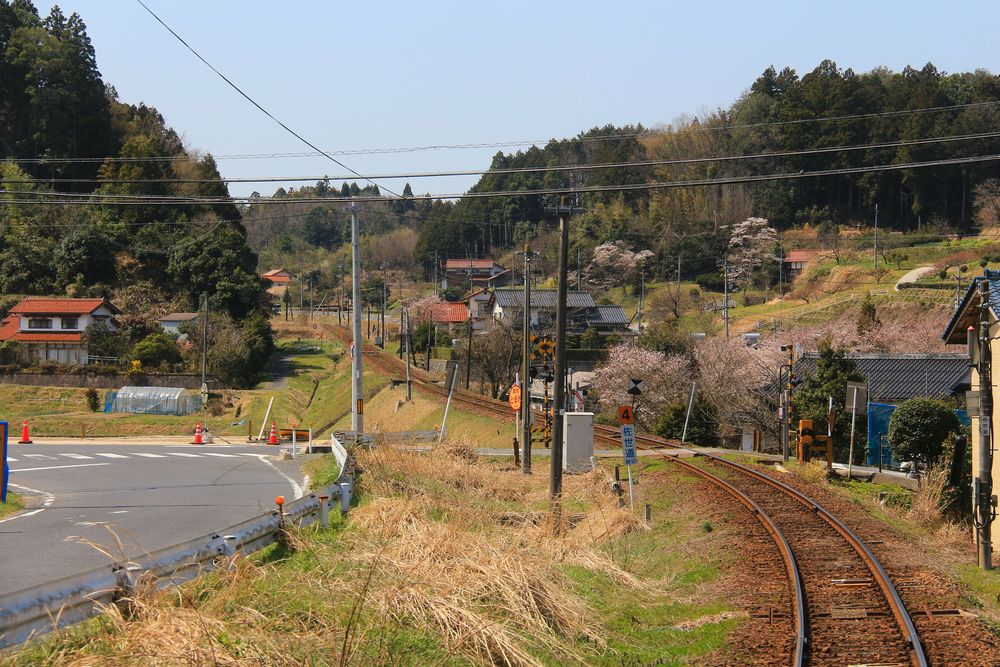 When the train started its journey down in the Shinji region spring had already brought colour to nature. At Izumo Daitô, around 13 km from Shinji. (2018) 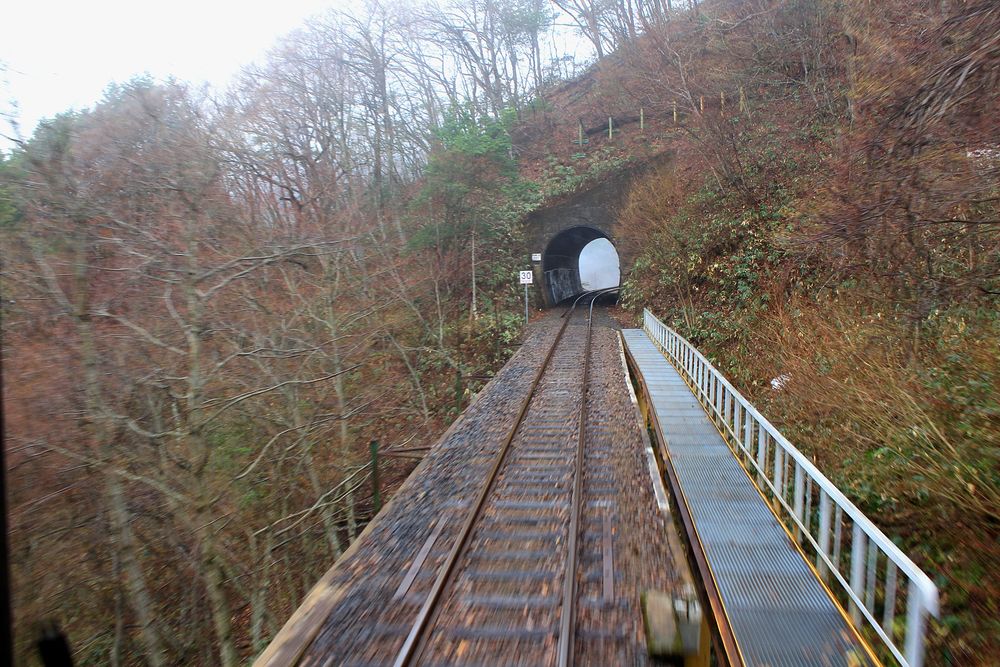 Coming down from Bingo Ochiai through wild and desolate country. Below Miinohara. (2015) 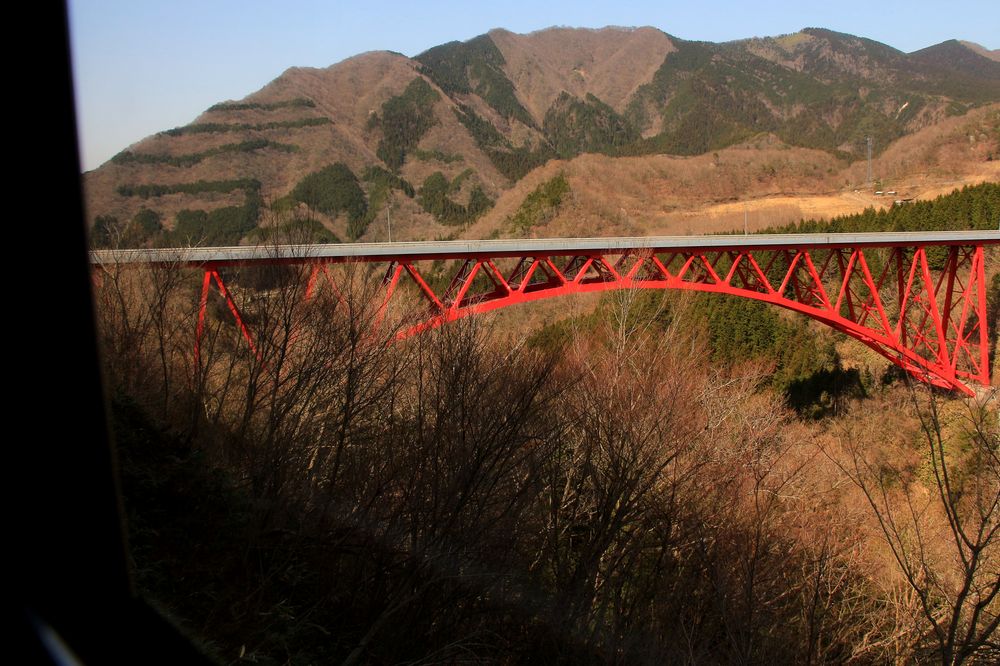 The red highway bridge seen from the train before reaching the summit at Miinohara. (2018) 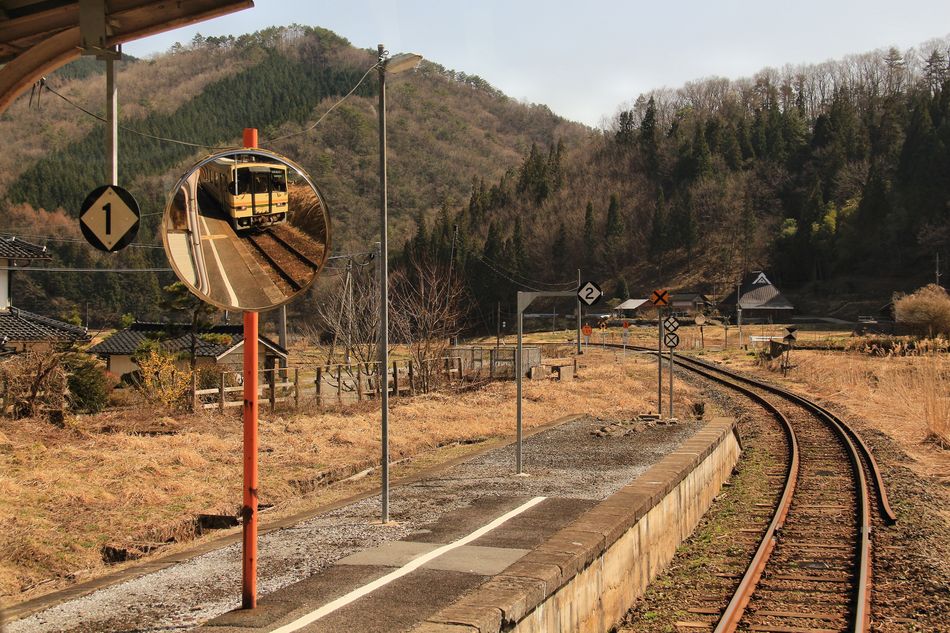 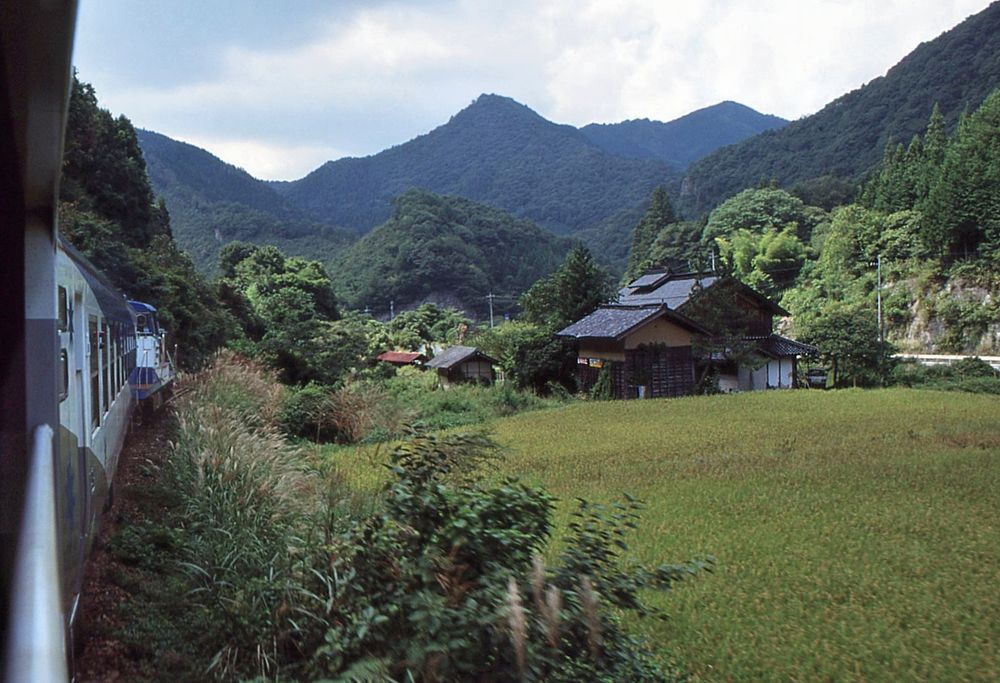 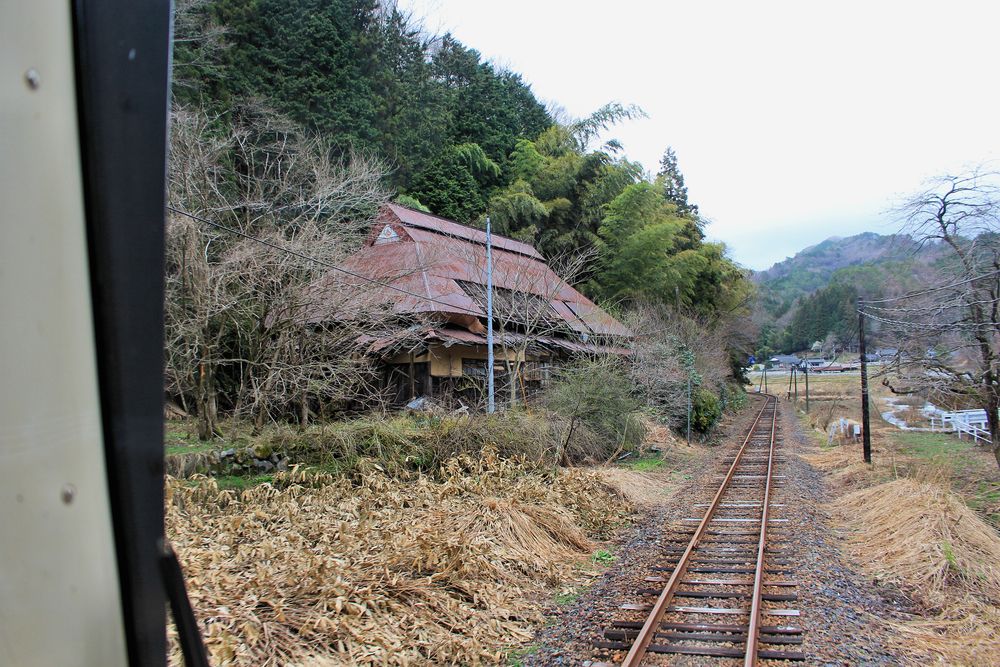 A dilapidated farmhouse near Yuki. The old thatched roof can be seen under the broken iron cover. (2015) 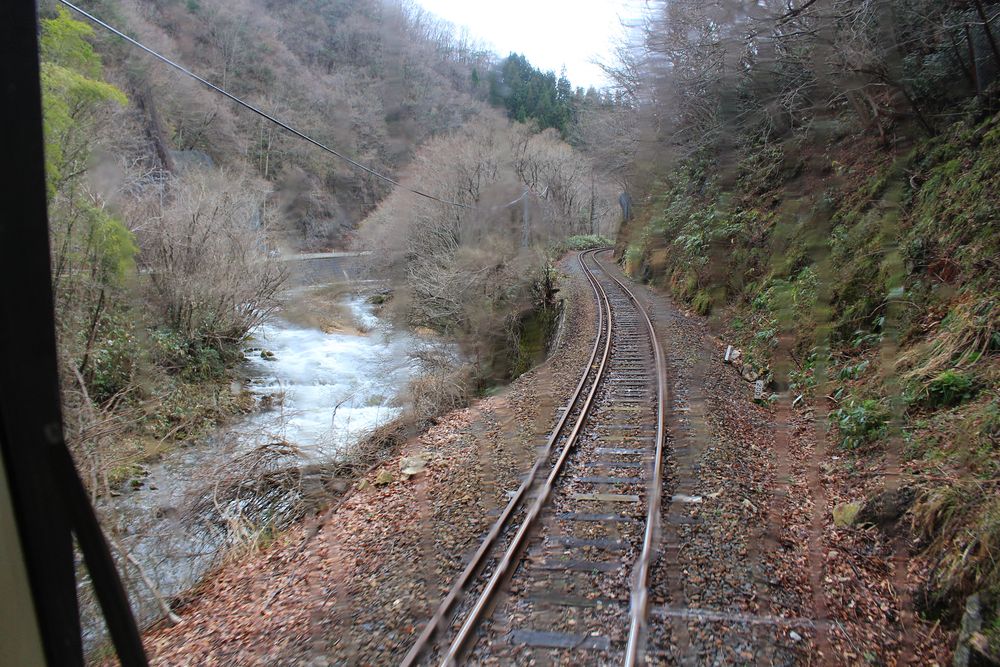 In damp and rainy weather the train makes its way from Bingo Ochiai down towards Yuki. (2015) 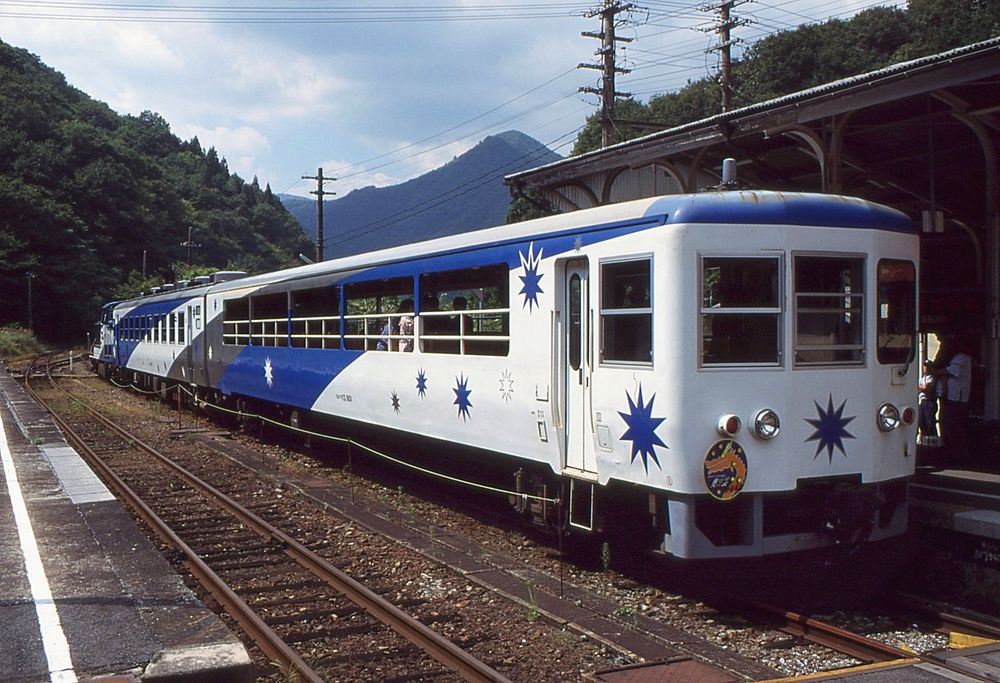 Bingo Ochiai with the tourist train "Izumo Orochi". The two coaches are SUHAFU 12 801 and SUHAFU 13 801, both fitted with a driving cab and pushed up by the locomotive from behind. (2002) 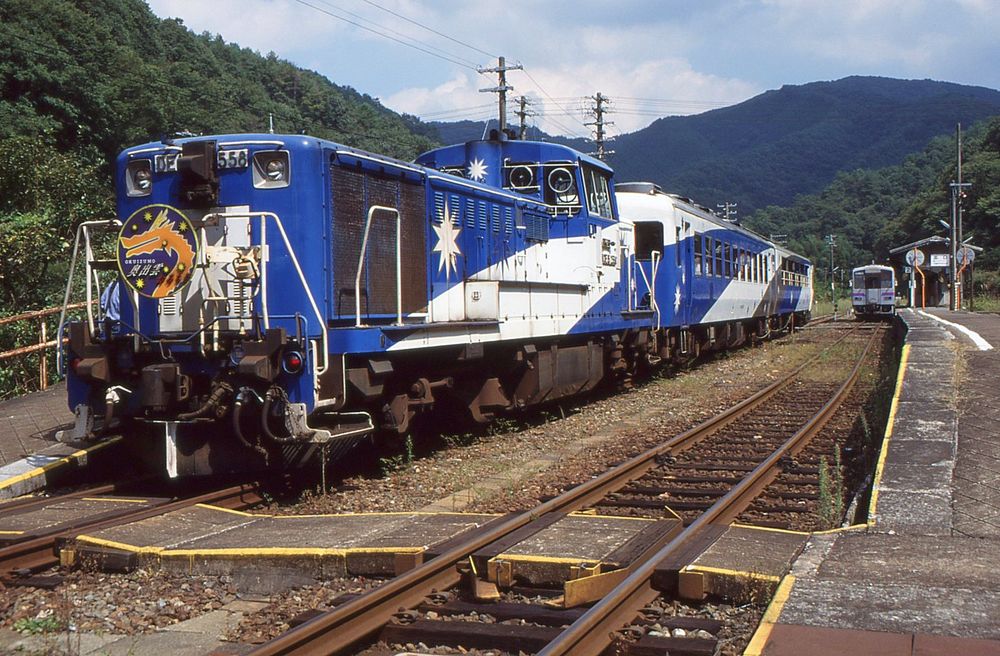 Locomotive DE15 2558 on the tourist train "Izumo Orochi" at Bingo Ochiai. On the right is KIHA 120 no.6 on the Geibi-sen, ready to leave through the Hiroshima highlands to Miyoshi. (2002) 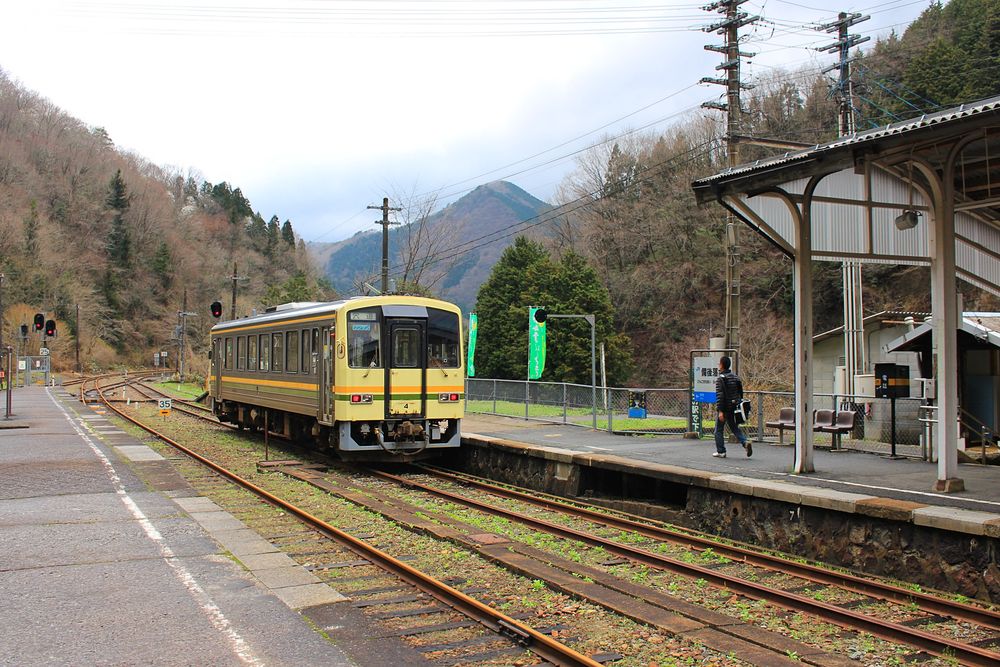 KIHA 120 no.4 about to leave Bingo Ochiai for Shinji. The journey will take almost 3 hours, with several long waits at intermediate stations. (2015)